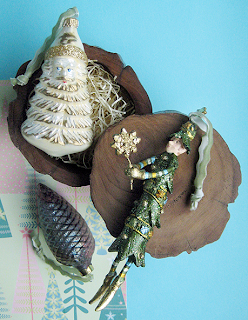 THE GREEN MAN motif in art and mythology has many variations. It is found in many cultures around the world. Often related to deities of nature, it is most often rendered as a face formed by leafy vegetation. As an ancient Pagan icon, the Green Man is interpreted as a symbol of rebirth, representing the cycle of growth each spring—much like the early decorated evergreen trees came to represent. Some speculate that the mythology of the Green Man developed independently in the traditions of separate ancient cultures and evolved into a wide variety of permutations found throughout the world (from Osiris to Peter Pan, and even an ivy-wreathed Father Christmas, for example). He frequently appears, carved in wood or stone, in churches, chapels, abbeys and cathedrals, where examples can be found dating from the 11th century through to the 20th century. Early Christian missionaries would often accomodate local gods such as the Green Man and adapt them into obscure saints. In any case, the Green Man survives as an ultimate symbol of man's connection to nature, as well as a vital symbol of pre-Christian tradition.

ORNAMENTS that represent a figure are rarely rooted in something deeper than a cartoon character or something meaningless and cute. When a figural ornament catches my eye, there has to be a personification of something in nature involved—something that has a magical and enduring quality to it—much like the Green Man. I have collected several ornaments over the years that personify the evergreen tree and find them to be one of the purest representations of what the custom means to me. The appearance of the first decorated tree dates back to 15th century Germany or earlier, but didn't appear in America until the 1700's. Even so, the decorated tree didn't catch on in the United States until ornaments were brought here by families immigrating from Germany and England in the 1840's after being popularized by the German Prince Albert and his wife Queen Victoria.


THE FRUIT of evergreen trees is the cone or pod, which contains the seeds. Pine cones were the first  glass ornaments made and are a large part of my collection. One of the most memorable Christmas trees of my childhood was a living white pine tree that our family planted in the corner of my parent's yard at the corner of Abel Street and Highway 278 in Hokes Bluff, Alabama. Before my siblings and I sold the property (a couple of years after our parent's death in 2005), I took pictures of the tree, which must have been at least fifty or sixty feet tall at the time. I also collected the large cones that were scattered across the yard with the intent to make a huge wreath out of them. 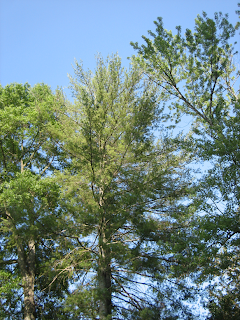 THIS TREE (left, middle) must have been my first lesson in how meaningful the evergreen would become to me. I fondly remember my father and I laboriously decorating it with those large multi-colored outdoor lights every year until the tree grew too large to manage such an endeavor and too unsafe for the electrical circuits in our home. The annual Christmas trees at the Rockefeller Center in New York City or at the White House in Washington, D.C. had nothing on us in our corner of Alabama. I would stare out the window at that tree every holiday, even after it wasn't lit—imagining it in its first incarnation as a Christmas tree in our living room. It was a beacon in our community for all the light and love my parents gave to our family and will always live in my memory as an ageless and evergreen feat of magic during the holidays. 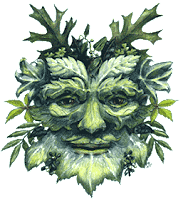 TREE PERSONIFIED | The face in the tree (top, right) could be interpreted as Santa (or Father Christmas) as well as the Green Man (right) in this unusual figural tree ornament handcrafted in Poland and purchased from Home Goods (2008). A spriteful wood-nymph-as-tree ornament was purchased in 2008 at Papyrus in Lenox Square Mall, Atlanta (where the Macy's Great Tree is lit every holiday).This pine cone ornament's unique coloration is from raku firing (an ancient Japanese technique), hand-casted by J. Davis Studio and was purchased at Maralyn Wilson Gallery in Birmingham, Alabama in 2005. The wooden box made from a hollowed out limb or trunk (shown supporting the figural ornaments) is from Tozai Home. The lid is made flush from a slice of the trunk or limb and rotates on a hidden screw hinge to one side. A similar box could be crafted from your discarded holiday tree trunk.