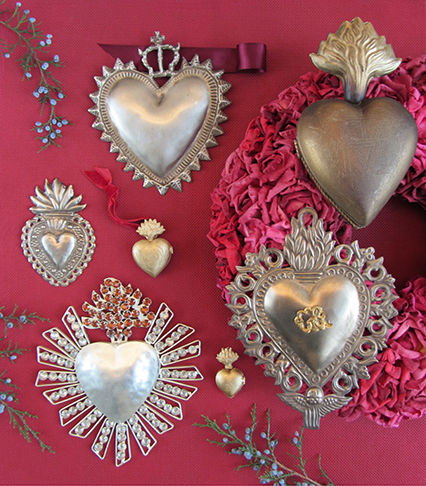 WHEN YOU'RE in love, Valentine's Day is a sacred event. Saints, sinners and symbolism unite under the umbrella of unconditional love. If you're thinking rationally, love is bound by the heartstrings that give life ritual meaning at least, and a fullness of purpose at most. You could metaphorically call it the difference between a kiss and a rose—a kiss being just a kiss and a rose being imbued with a full cycle of meaning and symbolism.

SAINT VALENTINE, who the holiday is named after, is recognized by the Catholic Church, but through three different entities. One legend has it that Valentine was a priest in third-century Rome who performed secret weddings even after the emperor had outlawed marriage for young men, reasoning that single men made better soldiers (an interesting piece of history in light of  today's "don't ask, don't tell" political climate).

ANOTHER LEGEND has it that St. Valentine was martyred for helping Christians escape Roman prisons. The most common legend holds that St. Valentine is in the reverse role (in prison), where he falls in love with his jailor's daughter, writing her a letter on the eve of his execution which signed with the now famous phrase "From Your Valentine."


SOME SUGGEST the holiday can be traced back to Chaucer in the 14th century (old English) writing about the season that birds choose their mates. These lines were part of a poem written by Chaucer to honor the first anniversary of the engagement of King Richard II to Anne of Bohemia:

For this was on seynt Volantynys day
When every byrd cometh there to chese his make. 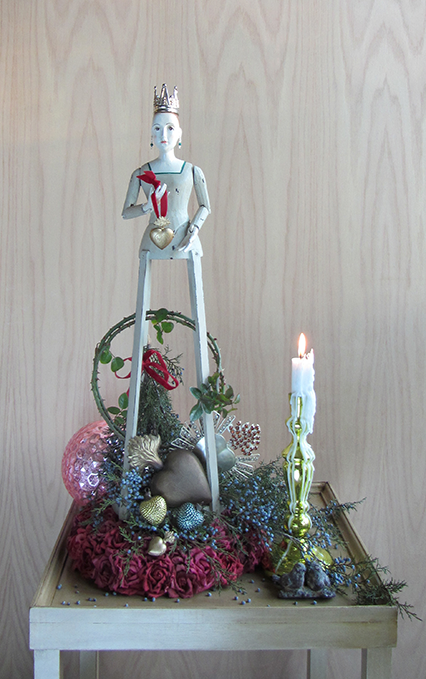 THIS SANTOS cage doll (above) is dressed for the occasion of unconditional love and holds a small sacred heart Ex-Voto locket. An altar to any saint of your choosing, the empty conical shape of her skirt (or cage), becomes personally meaningful with the addition of your own artifacts and anything else deemed symbolic. An anthropological treasure trove abounds within the world of saints. I've chosen antique heart ornaments and sacred heart Ex-Voto locket ornaments to celebrate Saint Valentine's Day, along with berried cedar branches and a trailing rose branch which last summer, circled in on itself in the top of a planter forming a crown of thorns in my container garden. Could that naturally-formed crown of thorns be a firm reminder that love is as much about the warm fuzzy feelings you get inside as it is the prickly affair of forgiveness? 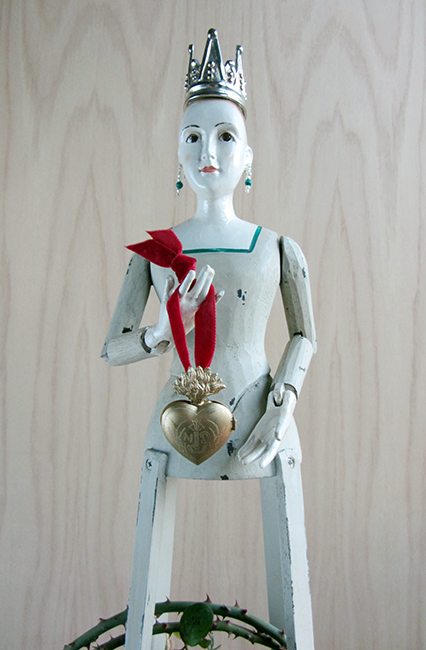 I DON'T MEAN forgiveness in the conditional/traditional sense. If you were to choose the jailed Roman martyr, St. Valentine mentioned above, his story goes that he was personally interrogated by Roman Emperor Claudius II. Claudius tried to get St. Valentine to convert to Roman paganism in 0rder to save his life. But Valentine conversely tried to convert the Emperor to Christianity to which Claudius threw him in a Roman prison to wait his fate. Valentine's jailor had a blind daughter to which he wrote the famed "From Your Valentine" letter. Legend has it that her sight was restored through St. Valentine's loving intercessionary prayer. 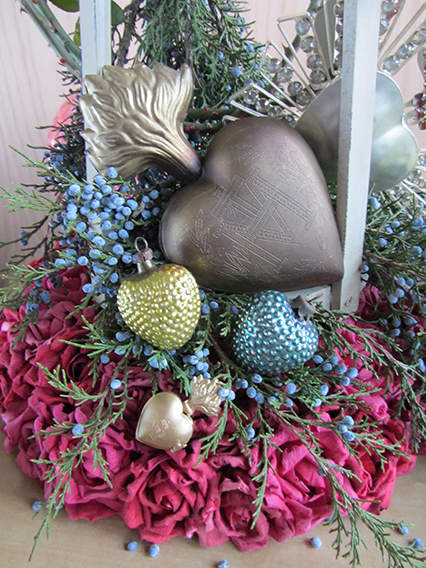 LOST IN THE STORY, St. Valentine chose a far more loving and compelling path of compassion and unconditional forgiveness for his jailor's daughter. This stands in stark contrast to the premise that forgiveness is conditional as it is in the Catholic practice of confession. Other protestant traditions carry the same precept without the benefit of an intermediary priest. In most protestant religious traditions, the granting of forgiveness is conditional on the offender's remorse and pleas for pardon.

ST. VALENTINE'S  lesson is clear when you are presented with this: Divine love and forgiveness are unconditional. That's the lesson exemplified in all the lives of the saints. This Valentine's day, I invite you to take your own spiritual journey to that place within your own hearts. It is rarely achieved by mere mortals, but going down this liberating road to unconditional love and forgiveness is something to celebrate. Even so, all most of us can muster in achieving this most noble goal is to begin the journey in the right direction.

SACRED CAGE | (Above photos) This reproduction Santos Cage Doll was found at Tuesday Morning. It sits atop a crepe paper rose wreath. Ex-Voto ornaments are listed above and from Eleanor Brown Boutique and SantosCageDoll.com. Her crown was purchased through eBay. Two unusually-colored antique mercury glass hobnail heart ornaments are from my personal collection. 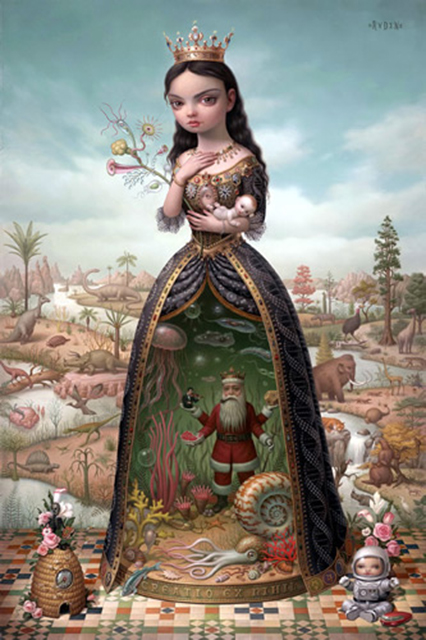 NEO GOTHIC | (Above) "Arcadian Gothic" artist Mark Ryden's paintings are layered with references ranging from Renaissance landscape and Neoclassical portraiture to pop-culture kitsch. For tree lovers like me, Ryden's "The Tree Show" series of art (of which the above example is not a part of) is reproduced alongside his meticulous research on the tree as myth. This book is available on Amazon.com here and a Special Edition Exhibition Book is available at Porterhouse Fine Art Editions, Inc. See the links to the book in the left-hand column of this blog also. His paintings are fascinating modern cultural mash up which are painted with classical methods.