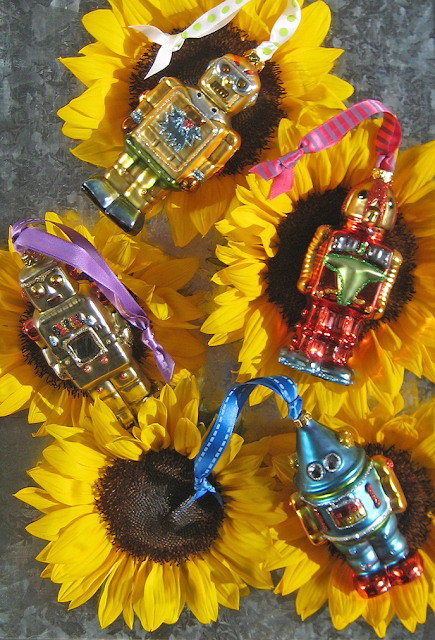 THE  FUTURE  does not always become what we want it to be. But our imaginings and projections onto it are what make the present, so it never hurts to freely associate what we want the future to be. One never knows where an idea will lead. After all, our thoughts have a surefire way of connecting to our reality. We can think about the totality of life situations, or we can focus on the positive things within the whole. It's almost always a choice to do so. And when we do focus on the good energy, more of it seems to come our way (the opposite is true also). One thing leads to another, just as in associative thinking.
AS  KIDS, we all thought about what it would be like when we grew up. Limitless possibilities are given room to grow, but when we become adults, life has a way of getting in the way of this childlike exuberance. My friend Lenny Zimmerman has found a way to tap into this free-association of our childhood psyche, and bring it back to life in his paintings of robots. I think that's why he has gotten such a positive response to them. He says: "I always thought robots would be super curious and full of awe and wonder . . . just like kids where everything is new." Lenny's paintings were the inspiration for this post. And they capture his amazingly inquisitive nature as a talented artist and graphic designer. He projects human thoughts and situations onto mechanical beings. 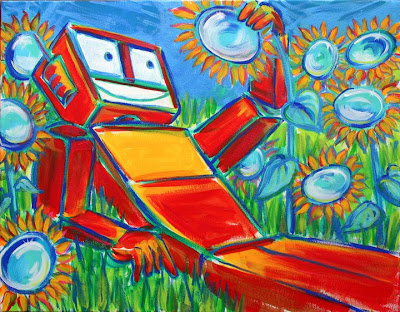 IT  HAS  ALWAYS  been this way with robots. As kids, robots represented something that we could project our thoughts about the future onto. They became more human to us as a result, in the increasingly manufactured world in which we live. Sometimes they could be brutal or scary, but more often than not, we saw them as friends or searched for a way to do so. In becoming adults, we saw that some menial and repetitive tasks could be replaced with robots, but they could never quite replace anything with real emotion. We all learned that we still had a living-and-breathing emotional life in this natural, not manufactured world.
RETRO ROBOTS | (Top photo, clockwise, from top left):
The gold/silver robot ornament was inspired by the 1950s Japanese Yonezawa Gold Beacon Robot tin toy.
The red robot ornament was inspired by the 1950s Japanese Nomura X-70 Robot tin toy. The original robot’s striped head would open up like a flower to reveal another head.
The blue cone head robot ornament was inspired by the 1950s Japanese Yonezawa Cone Head Robot tin toy.
The silver robot ornament was inspired by the 1950s Japanese Yoneya Silver Walking Robot tin toy. The original wind-up toy robot had unique side-stepping flipper feet.
All the ornaments above are ©Midwest/Seasons of Cannon Falls and are available at Tin Toy Arcade in College Park, Georgia.
PURE IMAGINATION | (painting above): Lenny "Porkchop" Zimmerman titles this painting "Robot in the Grass." It creates a world where a robot relaxes in the grass surrounded by sunflowers (or are they sunlamps?). Just as real sunflowers follow and face the sun, these sunflowers are emitting an effusive wonder back to the viewer through a robot discovering his emotions. Lenny says of this painting "I found a bright spot of happy."
©2010 DARRYL MOLAND | ALL RIGHTS RESERVED
photography and styling by Darryl Moland
as inspired by Lenny "Porkchop" Zimmerman
painting by Porkchop
ONE  OF  MY  favorite recent movies about robots is the animated feature from Pixar named Wall-E. It has a profound ecological message of how we need to take care of the natural world (it shows a scenario if humans had to leave Earth to survive). If you haven't seen it, I highly recommend it! Go here to find out more or view the trailer.
ALSO, one of the most brilliant commercials I've seen lately is this one about remembering what it's like to have the "pure imagination" of a child again. See the commercial below (click arrow on the image below to start and then click again to view the wide screen version on YouTube):