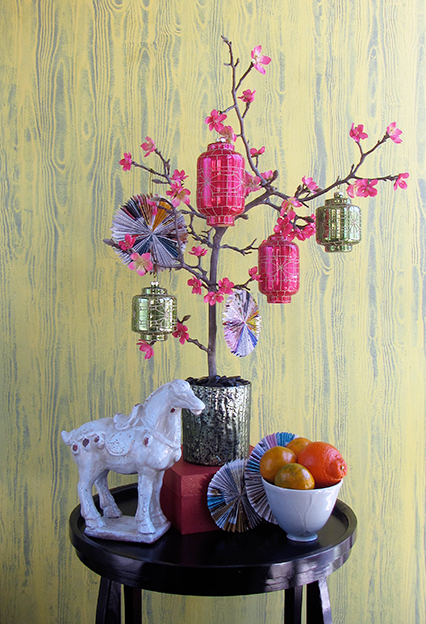 LUNAR NEW YEAR or Spring Festival in China is not just one day of celebration as it is in the United States. The Lunar new year is, of course determined by the lunar calendar. The festivities starting on January 31st extend for 15 days. Other Asian countries (including Korea, Vietnam and Japan) get in on the celebration.

THE NEW MOON starting the night of January 30th this year is also known as the Black Moon. In addition, it's the second Supermoon of the month. This is similar to the Blue Moon where there are two Full Moons in a calendar month. Some Pagan cultures imbue such a lunation a lot of power. This raises the stakes with regard to any ritual celebration of the lunar cycle (such as the Chinese Lunar New Year). It is a particularly auspicious time in the months ahead to devise a new way of being. It's a time to revise old habits with a goal toward a better future.
THE CHINESE ZODIAC, known as Sheng Xiao is based on a 12-year cycle with each year being related to an animal sign. This year's trip around the sun will be the Year of the Horse. Each year is designated by an animal that interacts with one of five "earthly branches," (earth, water, fire, wood and metal), with this year being a "yang wood" year—defining the mood and direction of the world. 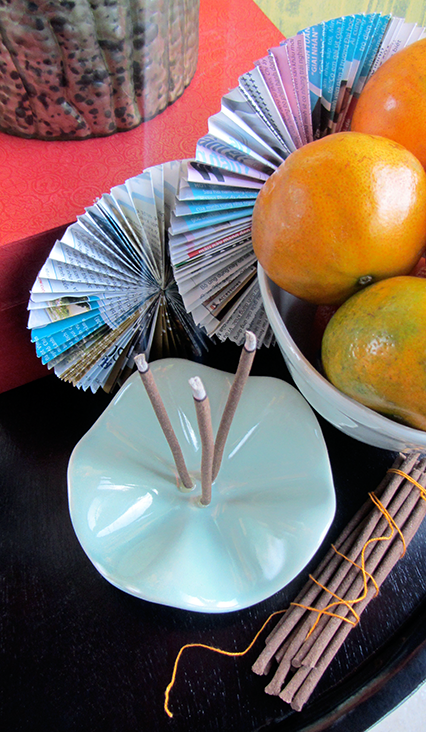 THE YEAR OF THE HORSE contains a great deal of fire energy. Along with wood, the flames are stoked. In a "yang wood" year people are said to stand firmly by their principles, making it harder to negotiate or compromise. The combination of a Horse year and a "yang wood" year only happens every 60 years and is historically marked by regional warfare. 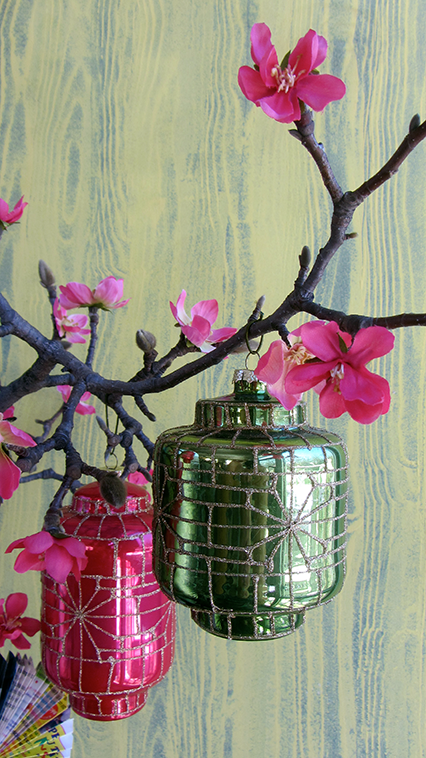 THIS TREE branch is guarded by a Chinese-style horse and held upright in a faux bois container in front of a faux bois background, both representing "yang wood." Incense is a common tradition at altar rituals throughout the holiday and represents the fiery energy of 2014. The tree is hung with pleated paper disks and glass lanterns. The paper disks represent fireworks; the noise from which is to scare away the half-dragon, half-lion monster "Nian" who comes out of hiding during the Lunar New Year. By scaring away Nian, the Chinese wish that the coming year will be full of opportunities and prosperity. The glass lanterns symbolize the lantern festival which marks the conclusion of the celebrations (this year on Valentine's Day). The "forced branch" with flowers represents spring. And displaying and eating tangerines and oranges is said to bring wealth and luck. The tradition stems from the way the Chinese words for gold and orange sound alike, while the word for tangerine echoes luck. 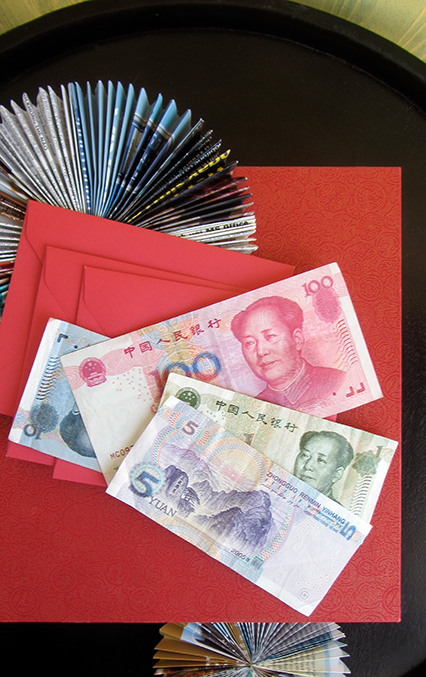 RED ENVELOPES are handed out to younger generations by their parents, grandparents, relatives, and even close neighbors and friends during Chinese New Year and usually contain "lucky" money. Giving and receiving red envelopes, gifts, and business cards is a solemn act. They are usually presented and received with both hands, although the culture has become less formal about such things. 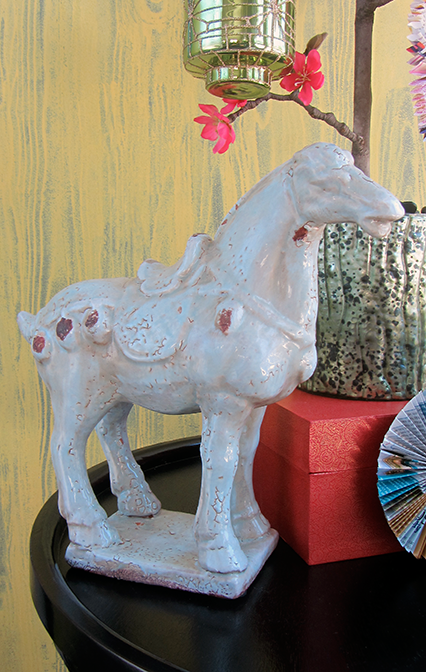 MANY FOLKTALES are also shared among families and friends during the Lunar New Year. This year the Story of the Taoist Farmer (The Horse that Ran Away) will surely be one of many parables that is repeated:

This farmer had only one horse, and one day the horse ran away. The neighbors came to console him over his terrible loss. The farmer said, "What makes you think it is so terrible?"

A month later, the horse came home—this time bringing with her two beautiful wild horses. The neighbors became excited at the farmer's good fortune. Such lovely strong horses! The farmer said, "What makes you think this is good fortune?"

The farmer's son was thrown from one of the wild horses and broke his leg. All the neighbors were very distressed. Such bad luck! The farmer said, "What makes you think it is bad?"

A war came, and every able-bodied man was conscripted and sent into battle. Only the farmer's son, because he had a broken leg, remained. The neighbors congratulated the farmer. "What makes you think this is good?" said the farmer.*

THIS STORY is an example of an ancient Chinese philosophy known as Taoism. This Taoist farmer believed in accepting events as they come, without becoming too elated by the highs, or too saddened by the lows. The Taoist principle of living in harmony with nature and what it brings, serves as a metaphor for life. It is an understanding that difficult and stressful events can turn out to have a long-run positive effect on your life. It's a bold reminder that everything happens for a reason (or maybe only for a season). 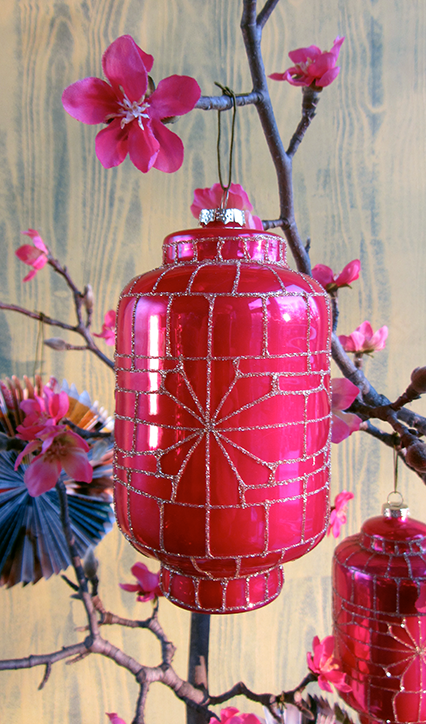 IN CELEBRATING the lunar new year, it is good to remember that bit of Taoist philosophy and apply it to all the ups and downs we all inevitably face during the course of a year.


©2014 DARRYL MOLAND | ALL RIGHTS RESERVED
collecting, photography and styling by Darryl Moland.
*The Horse that Ran Away as told by Executive editor, Elise Hancock, in the Johns Hopkins Magazine, November 1993.
Posted by darryl moland at Friday, January 31, 2014 No comments: