flowers for my mother 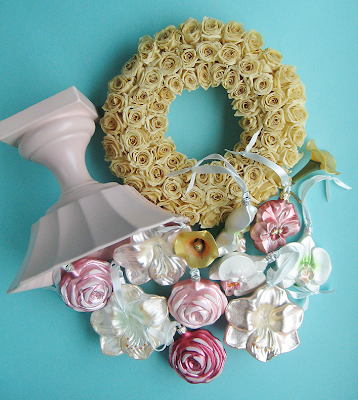 THE PINK ROSE has become a supernatural symbol of my mother since her death. I dug up my mother's favorite pale pink rosebush from my childhood yard before my siblings and I sold their house a few years ago. Planted in a large container now, it has bloomed only on mother's day and my birthday—literally, the first blossoms opened on those particular days in the last couple of years. Whatever blooms were set in bud those days were the only ones of the season. In another unexpected instance, eight unusual pink paper roses arrived unexplained in a small box within a larger box of other items I had mail-ordered. I distributed those eight paper roses between my siblings as a posthumous gift from my mother. I didn't dare inquire why, but I had a sense that my mother has something to do with those roses being packed in the box.

I TOOK a colorful vase of homegrown roses from my mother's hospital room that my parent's neighbor, Jo Aultman, had brought to her during her last days. I left the hospital after mother died and drove the short trip home—the place where I had grown up. I looked at the roses and the air became electric. It felt as though I was seeing the life energy of those roses vibrate in front of me. I felt this incredible energy enter through the top of my head and travel throughout my body, all the way to my toes. If this is what Nirvana feels like, I felt it. I had an incredible sense of giddy happiness and a sudden inexplicable peace wash over me. It was as if, once she had realized she had passed on, she wanted to touch me one last time—even though I was holding her hand at her bedside when she died.

I KNEW it was my mother's spirit. Nobody can tell me any differently. In talking to my brother Mal later, he had a similar experience. That confirmed it. I wasn't loosing my mind in grief. I knew my mother was free of her failed earthly body and in a happier, more peaceful place. I knew that everything would be alright. Beyond that, this experience was a coded knowledge—something was there that I still can't explain. I've held that feeling with me in low times. It must have been a taste of the freedom one's soul feels after death—a confirmation that our souls have a life beyond our physical selves. What a gift!

I BROUGHT mother roses from that bush innumerable times when I was a child. She brings roses to me now as an adult. That pale pink rose is a symbol that she is gone, but has become more than that. An excerpt from "Calling All Angels," a song played at mother's funeral in July 2005 (that I had played for her after my father died) says it as only poetry can:


. . . and every day you gaze upon the sunset
with such love and intensity why it’s...it’s almost as if
if you could only crack the code
then you’d finally understand what this all means

but if you could...do you think you would
trade it in all the pain and suffering?
ah, but then you’d miss
the beauty of the light upon this earth
and the sweetness of the leaving . . .
—Jane Siberry


THIS LAST DAY of summer, I give my mother flowers once again, this time for all to see. This is a medium of light and energy, after all. I consider myself one of the lucky ones. She and my father gave me a life that continues to blossom. They are the bedrock my roots hold onto and draw nourishment from. As hard as it is sometimes to keep my head up, all I have to do is remember them and I bloom with the palest, most pure intent. They are still shining beacons of hope to me. And hope does die last. 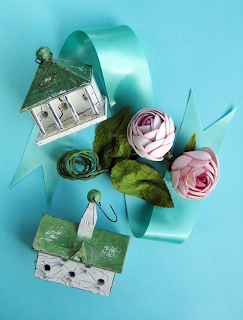 SUMMER'S END | This collecton of mercury glass flower ornaments (above, top) spill from a pink container next to a preserved rose wreath I gave my mother for mother's day a couple of years before she died. The pink roses are German-made ornaments, the orchids and pansy ornaments are made Poland—all of which are from Martha Stewart's now defunct Martha by Mail catalog. The three amaryllis blossoms were bought at Kmart a few years back and were purchased from the Martha Stewart Everyday Christmas Luster collection. The yellow trumpet flower clip ornaments are painted glass made in Poland and were found at Saks Fifth Avenue in Phipps Plaza, Atlanta.


FLYING HOME | The aforementioned paper roses (above, left) that arrived inexplicably in the mail after my mother's death. Two birdhouses are tiny ornamental representations of the homes of free spirits. Birds, of course, can build their own homes, but are practical enough to feather their nests in whatever shelter they find. 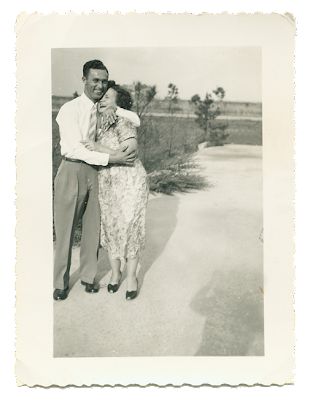 LOVEBIRDS | My parents, Hubert and Virginia Moland (right), in a giddy moment early in their long life together. Photographer unknown.