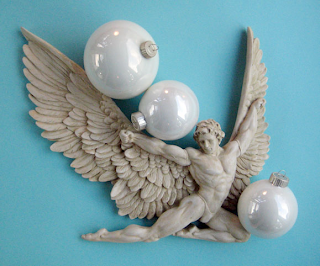 E X H I L A R A T E D with his ability to fly with wings made of wax and feathers, Icarus followed his own course and flew too close to the sun. His father Daedalus (who was a renowned Athenian artisan) crafted each of them a pair of wings from these delicately weak materials in order to escape imprisonment inside a massive labyrinth in Crete. The admonition was that if Icarus flew too low, the feathers in his wings would get wet and make it difficult to fly. If he flew too high, the sun would melt the wax that held the wings together and they would break to pieces. Daedalus flew to safety. And Icarus' lifeless body eventually washed to shore.

L I F E   I S   F U L L  of highs and lows and it's easy to attach romanticism to myth. Whether it is actual reality or created as an act of imagination doesn't matter. You want to believe what might very well just be fantasy. But you understand the parable of the story when you apply it to your own reality.


A S   I   R E L A T E D  in a previous post, I purchase ornaments to celebrate and remember important life events. I bought two of these beautiful winged hearts (the only two they had) at Home Goods last fall. They were both in different parts of the store and randomly displayed, as is often the case in stores stuffed full of merchandise. I usually don't go for the bling, but these wings forming a heart, I thought, were exceptionally well-crafted. I gave one of them to someone very special in my life on Halloween last year and it hung on the first Christmas tree we had together. Even though we live separately, it was ours. Why Halloween? Because that night was our first real night on the town alone together and he had mentioned that he felt as if it was any early Christmas. We went to see the musical Wicked at the Fabulous Fox Theater that night. It's one of those grand atmospheric theaters that escaped being torn down. 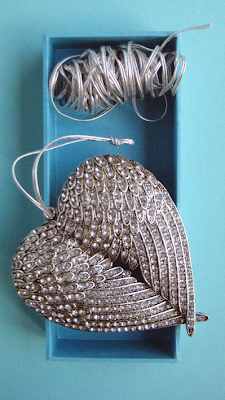 O F   C O U R S E , I took the anticipatory Christmas idea and flew with it. I decorated a black wire Halloween tree and put up the decorations I had for Halloween to surprise him (he was so touched, he cried). But I had a "Christmas" gift to give him to cap the night off. It was a very special and romantic night for both of us. I'll never forget it—I don't think he will either. We may have both not heeded the warnings over the past year in trying to fly to freedom together. All remains to be seen. I know he holds my heart in his hands. Whether or not he and I can make a life together, I will always cherish our time together. We've certainly had a year full of excitement and have grown to love each other dearly. He's the only man who has ever given me a ring along with a promise. He gave it to me on Christmas Eve while we ate at Bacchanalia, which by far, is one of the most celebrated restaurants in Atlanta. And that night is one of the most cherished of all my Christmas memories. And coming from a holiday fanatic like me, that says a lot. It was the first time I really felt home again since both of my parents died in 2005. Christmas with them was always beautiful in so many ways.


WINGED FLIGHT | (above, right), A bas relief sculpture of Icarus with his outstretched wings is surrounded by white glass ornaments by Martha Stewart Everyday/Woodland Holiday line at Kmart.

WINGED HEARTS | (above, left), Heartstrings all wound-up, and the rhinestone-studded wings folded into a heart shape. (below, right) The other winged heart on the holiday tree (2008) that illustrates the mock-up cover of my book. 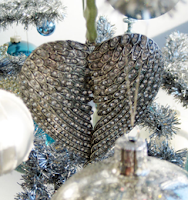