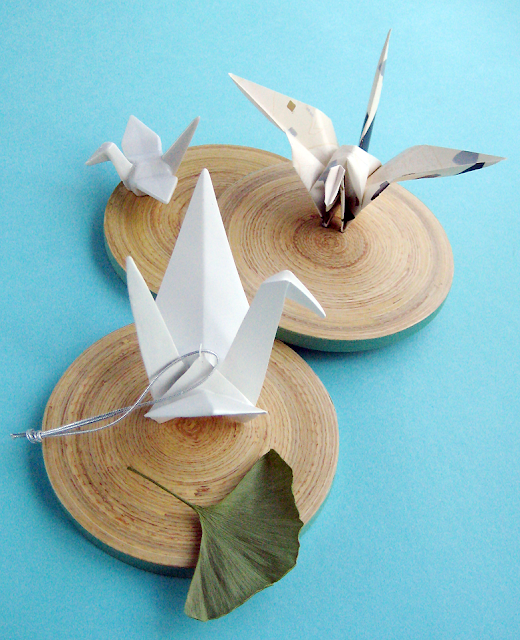 J A P A N E S E   O R I G A M I  cranes are the quintessential symbol of the art of paper folding. My collection started last Christmas and all three (pictured at right) were gifts from my tenacious-by-a-thread-beau. Folding a thousand such cranes (only one of mine is actual paper origami), stringing them together on 25 strands of 40 cranes each (a Senbazuru) will make a wish come true; help you find a mate; and bring both of you a long life of good luck, health and prosperity; all-the-while garnering world peace. Not to be dubious about this legendary and time-honored Japanese custom, I like to think that the meditative process of embarking on such a concentrated endeavor would have to bring about some incredibly good Karma to the world. In spite of the daunting prospect of doing such a thing, at least I can dream of a tree decorated with a thousand cranes and living luckily, healthily, prosperously, peacefully, and happily-ever-after.

A N   A U S T E R E  (couldn't be 1,000) and elegant version of a tree like this, published by Martha Stewart has already been done, along with everything else. But with a thousand cranes in all sizes and a tasteful color-scheme (not to mention a highly creative staff), I too, could produce a knockout symbol of all the good things in life. Or maybe my legions of (eight, officially as of this post) blog followers could just send me one crane they folded themselves? Eight is enough, right? Now 1,000 would be truly joyous! Is it too early to give Santa your Christmas wishes?

M Y   T R E E S  seem to always get overburdened with selections from an ever-growing prop studio (storage unit). This crane thing would be traveling light for me. And a hope for light and love traveling around the world, much like Santa himself on Christmas Eve.

N O T   T O   F O R G E T  another esteemed diva in my life, I have to give credit to Annie Lennox for her transformative song "A Thousand Beautiful Things." It truly has been one of my favorite songs since her album entitled Bare was released. Seeing her in concert on that tour, alongside one of my best friends, Alehandro back in March of 2003, the chilling songstress gave us goosebumps on numerous occasions during her playlist. Especially at one entirely unforgettable moment in the concert when a bell sound in one of her songs—like an amplified meditation bell—was cued with a single drop of liquid falling and causing a ripple on a huge projection screen behind her stage set (nothing there but whiteness and shadow until that point in the concert). It was a suck-the-air-out-of-the-room moment of clarity! And Ale and I looked at each other and shuddered in delight.

W H E T H E R   O R   NOT  it was "A Thousand Beautiful Things" (I think it was, but Ale thinks it was "Bitter Pill"), it all went down so smoothly that unforgettable night being serenaded by Annie at the Atlanta Symphony Hall. We were transformed. Thank you Ms. Lennox for that!

I   S H O U L D  get busy folding! And I'll listen to the words of Annie's song while I do it (please do it too—one will suffice). And I hope to find all the beautiful things about life everyday—even as I'm having to swallow a bitter pill along with it.


THREE OF A THOUSAND? | (Above, from front to back) A white resin crane—with permanence—from One Hundred80 Degrees, an authentic folded crane from an Atlanta artisan Sachiko Kogure, and a ceramic crane intended for use as a place card holder from Target, 2008)
BEAUTIFUL THINGS | A small portion of my
"vast" prop "studio" (storage unit, below). 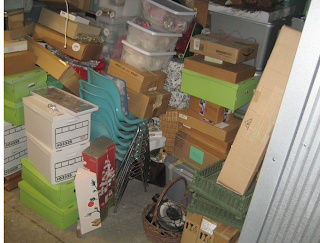