the secret life of leaves

Deciduous \De*cid"u*ous\
Falling off, or subject to fall or be shed, at a certain season,
or a certain stage or interval of growth, as leaves
(except of evergreens) . . . [1913 Webster] 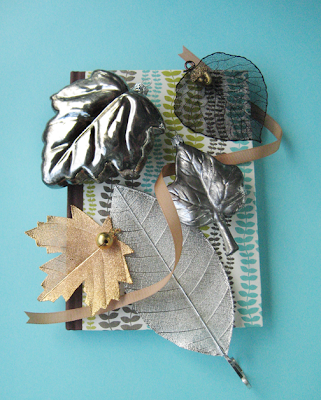 THERE  IS  A   "reason for the season" as they say. You can look at it a number of ways. The holiday season's visual focal point is the decorated evergreen tree, around which everything else revolves in most cases—even in households that don't celebrate Christmas per se. It is also a reverent celebration of birth and a hope for rebirth of man's spirit. In any case, I prefer to meld the disparate (or are they?) belief systems into one. All are symbolic of new life and rebirth in a profound way—and pay homage to their roots, no matter how popular custom has been morphed to fit one belief system or another. Its obvious to me that the resonance of the first beliefs and rituals involving decorating a tree of any sort is at the core of our central belief in nature and who we are as part of the natural world.

THE  INCREASING  prevalence of all sorts of leaf ornaments has been unmistakable in the past few years. It's no doubt because of the focus on the environment with concerns of global warming (or climate change, as it inexplicably became termed). Broadly, it is reconciliation between man and nature—an atonement for an unbridled growth (due to greed) of man's command over nature. The human race is realizing the awesome power of forces beyond our control and being put in our place—as a working part of the natural world, not the controller of it. Global crisis involves more than the obvious weather shifts and such. We have to educate ourselves with how our food is produced. Meat farming and food crops have already been seized by large corporations and industrialized and genetically modified, producing disease and making farmers into indentured servants. A lot of farmers are forced to not even save their seeds! They have to buy the new line of genetically modified ones for next season or face bankruptcy. And the very essence of life—water is being traded as a commodity as I write. To quote a line from a well-remembered 70's TV commercial, "It's not nice to fool Mother Nature." The product it advertised was doing just that. I'll side with Mother Nature and have real butter from grass-fed and hormone-free cow's milk, thank you very much.

DECORATING  an evergreen tree with deciduous leaves (or representatives of such), is a meld of the processes of life and death (which is deciduous) with the hope of everlasting life (which is evergreen). When ideas come together like that, we come to the realization that everything is connected in nature and that the whole is greater than the sum of its parts.

I  WISH  LIFE, in general, could be more like that. We all get caught up with the end result instead of recognizing that the journey is the most important part. In my view, being open to a myriad of ideas and taking the time to absorb and learn from them are what makes life exciting—no matter how scary or messy it might get. And that's definitely something to think about—something that carries your spirit back home—to being a humble and reverent part of something bigger than yourself—Mother Earth.

LEAF COLLECTION | (Above, clockwise from bottom left): A golden maple leaf with a tiny jingle bell attached from the Martha Stewart Everyday/Golden Traditions line at Kmart, a mercury glass maple leaf, a bronze leaf with a tiny acorn attached from the Martha Stewart/Golden Traditions line at Kmart, a glass ivy leaf, and a large silver leaf from Pottery Barn—all atop a 100% recycled fiber paper/soy ink book-bound journal from greenroom eco / clementine paper, inc. at Target.