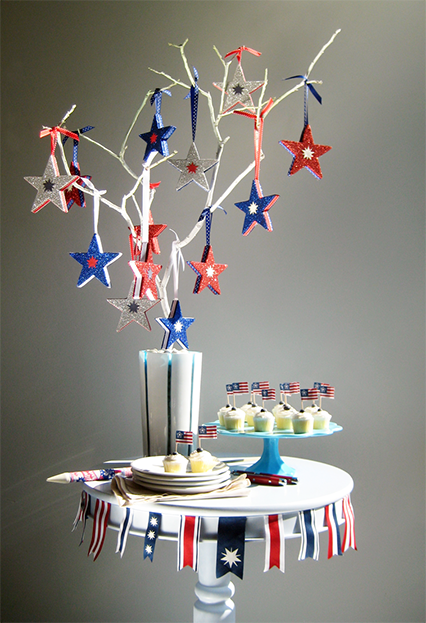 A STATELY ELM TREE that first stood in Boston Common in the late 1700's became an early touchstone for American independence. In the decade that led up to the American Revolution, this particular Liberty Tree provided a symbolic canopy and a physical gathering place for the people to assemble on their own terms and for their own purposes. The open space under its branches was called Liberty Hall and a flag pole was erected through its branches. A hoisted flag on this pole served as a call-to-action. Inflammatory cartoons and verses were nailed to its trunk. Even Tory effigies hung from its branches in protest. Under the boughs of the Liberty Tree in 1765, patriots, calling themselves The Sons of Liberty, gathered to protest the imposition of the stamp act. Innumerable lanterns were hung among its branches after the stamp act was repealed. 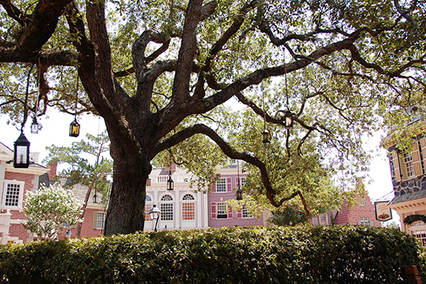 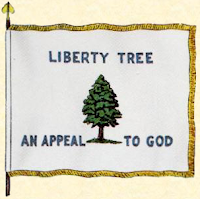 IN  THE  YEARS  that followed, almost every American town had a Liberty Tree —a living symbol of freedom of speech and assembly. Thomas Paine wrote the following song (below) in 1775, which explains the original tree's demise and its symbolic promise. During the siege of Boston, at the end of August 1775, a party of British Loyalists cut the tree down and used it for firewood. It was a spiteful act, knowing what it represented to the revolutionists. But this only fueled the fiery spirit of the colonists. As resistance to the British grew, flags bearing a representation of the Liberty Tree were flown to show an unwavering spirit of liberty.

In a chariot of light from the regions of day,

The Goddess of Liberty came;
Ten thousand celestials directed the way,
And hither conducted the dame. 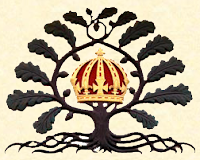 A fair budding branch from the gardens above, 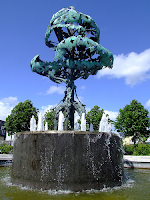 Where millions with millions agree,
She brought in her hand as a pledge of her love,
And the plant she named Liberty Tree.

The celestial exotic struck deep in the ground,
Like a native it flourished and bore;
The fame of its fruit drew the nations around,
To seek out this peaceable shore.

Unmindful of names or distinctions they came,
For freemen like brothers agree;
With one spirit endued, they one friendship pursued,
And their temple was Liberty Tree.

Beneath this fair tree, like the patriarchs of old,
Their bread in contentment they ate
Unvexed with the troubles of silver and gold,
The cares of the grand and the great.

With timber and tar they Old England supplied,
And supported her power on the sea;
Her battles they fought, without getting a groat,
For the honor of Liberty Tree.

But hear, O ye swains, 'tis a tale most profane,
How all the tyrannical powers,
Kings, Commons and Lords, are uniting amain,
To cut down this guardian of ours;

From the east to the west blow the trumpet to arms,
Through the land let the sound of it flee,
Let the far and the near, all unite with a cheer,
In defense of our Liberty Tree.

THE  INDEPENDENT  spirit of the American people was first symbolized by the Liberty Tree. It is my hope that on this and subsequent July 4th celebrations, the symbolic spirit of this tree serves as a touchstone for America's common link to all the people of the world as well as our original colonists from wide and far. Trees play an important role in creating and purifying the air that all the people of the world breathe freely, not independently. And they create it by the simple process of living in harmony with nature.


STARS AND STRIPES | (Top) My interpretation of the holiday serves as a tree centerpiece and is a bright reference to the original 13 American colonies. To represent each colony, I decorated a painted tree branch supported in a striped glass vase with 13 glittered wooden stars. I trimmed each star's edges with complementing ribbon and a paper star in the middle. See details below on how this was done. And since this is the United States' 234th birthday, we must eat cake. I've simply added little flag toothpicks stuck through a single blueberry to store-bought cupcakes. The table top is trimmed with a ribbon garland from the 2007 Martha Stewart Crafts line.

LANTERNS OF LIBERTY | (Above, 2nd and 3rd photos from top) This Liberty Tree, hung with 13 lanterns representing the original American Colonies is a dominant feature of Liberty Square in Walt Disney World, Florida. When I first went there as a child with my parents, it made a big impression on me. The lanterns are wired and lit at dusk. This particular tree is not an Elm, but rather a Southern Live Oak that was transplanted. Both photos by ladystardust722.

LIBERTY TREE MONUMENT | (Middle, right) Liberty trees have been popular all over the world. This sculpture in Carlow, Ireland was designed by John Bethan to honor those who were massacred in the Battle of Carlow, who fought and died in the cause of religious and civil freedom (marking the Bicentenary of the 1798 Rebellion in Ireland). The sculpture features a number of macabre skeletons arranged around an abstract tree shape. It is made of bronze and set on a circular base with a fountain.

TORY ROYAL OAK | (Bottom, right) Toryism is interestingly enough symbolized by this Royal Oak insignia. Toryism is a traditionalist political philosophy. It is one of the prominent political parties in Great Britain, but also features in parts of The Commonwealth, particularly in Canada. Historically it also had exponents in former parts of the British Empire. 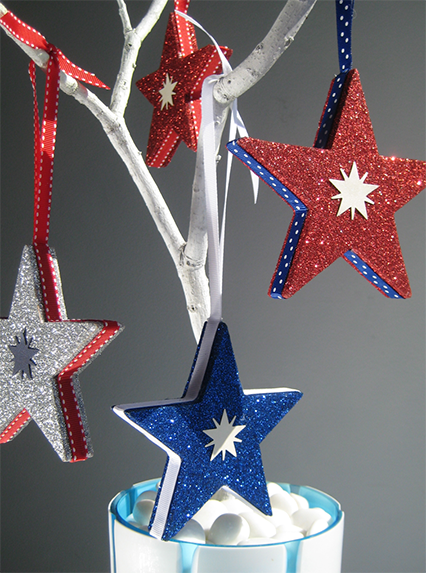 STAR MAKING | (Left) I bought these glittered wooden stars in the dollar bin at Target, Then I glued contrasting ribbons around their wide edges with a hot glue gun. To finish I added a punched paper star to the middle of each punched from metallic cardstock paper, then tied all 13 of them to the tree ("radiant star" craft punch from Martha Stewart Crafts).