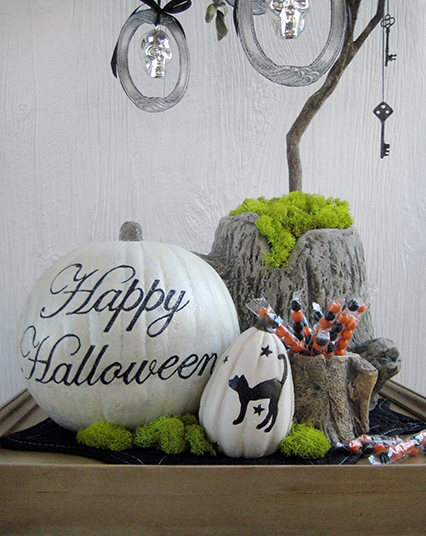 IT'S OBVIOUS everywhere this time of year, that Halloween has become the most celebrated holiday aside from Christmas. It hasn't been until the past few years that I've really gotten into the spirit of the holiday since my trick-or-treat years as a kid. When going out with a couple of friends, I dressed as— what else?—a spooky tree. Even though I cheated a bit and wore a cheesy web-bought costume, I did add more fake autumn leaves to it to dress it up.

LAST NIGHT, I realized that people—eschewing the commercial— are once again investing a lot of creative elbow grease into their Halloween costumes. It's great to see handmade and over-the-top inventiveness in designing costumes is making a big comeback. My friend Dana sewed her incredibly detailed blue gingham dress for her costume as Dorothy from the Wizard of Oz—making it really work with incredible makeup and hair and glittery red flats. With white face and big overblown red lips, Devin dressed as one of the fashion show moments of the late "enfant terrible"Alexander McQueen. I also saw some other really brilliantly designed costumes such as a woman dressed as a framed Mona Lisa—as the live image in front of the frame, complete with the moody background image. There was also a group of new acquaintances dressed as the One Percent, who made their costumes from fake money and got into full character by filling their bags with said fake money and giving it to people on the street, tossing it into the air, and even burning stacks of it while smoking a cigar!

I'M GUESSING THAT next year, I will have to do the same with a costume instead of spending all my spare time on conceiving and designing trees for my blog. I've spent part of two weekends now celebrating the holiday with friends here in Atlanta. Last weekend, I attended the 11th Annual Little Five Points Halloween Festival & Parade. I haven't checked, but I'm not sure if another city that has a Halloween festival and parade. It has been an Atlanta tradition for eleven years now! Local Atlanta artist, Ronnie Land designed and illustrated the really fun and creepy logo for the parade this year, which you see here. 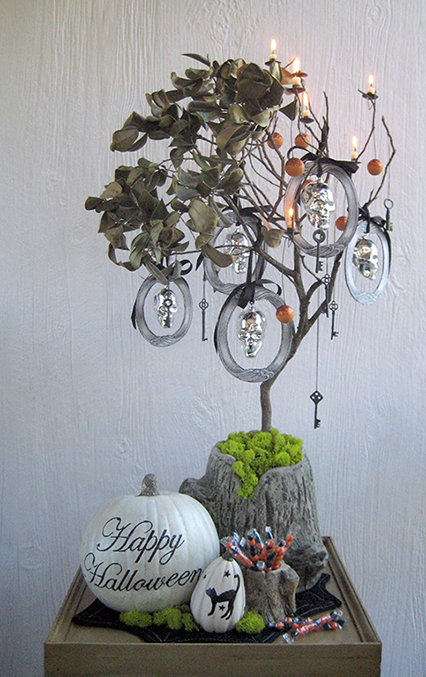 FUN AND CREEPY has always been my mantra for Halloween. The decorations I enjoy most have a definite macabre side, but are always fun and exuberantly creative. That was my goal when creating this "Skeleton Key Tree." So, of course, I emailed the well-known Halloween product illustrator and designer—Johanna Parker, and asked her what I could do with these amazing mercury glass skeleton head ornaments I found. Always in Halloween mode, I give her credit for giving me the idea of framing them and hanging skeleton keys from the branches. She didn't see the final results until this post. It was fun creating this tree and brainstorming with her about it. I searched high and low for the perfect craggy branch and retrieved it a while back in order to let it dry as it did. I even left some of the leaves on it to give it a creepier asymmetrical look.

EVEN IF YOU WAIT until the last minute—with a little advance planning, of course—your Halloween parade of costumes, decorations and decor can contribute to the fun and creepy spirit of All Hallows Eve. You're certain to encounter a parade of fun and creepy characters, whether receiving trick-or-treaters or going out on the town. Here's wishing you a happy, creepy and fun Halloween!

SPIRITED ELEGANCE | (Top two photos and above) This "skeleton key tree" makes use of a craggy branch with some of the dried leaves still intact, mercury glass skeleton head ornaments are from Z Gallerie. Handmade glittered frames were made from clip art glued and trimmed from matte board and the skeleton keys were found on eBay. The scene is set with a faux bois container for the tree, a faux pumpkin with calligraphy from Bayberry Cove and one with a cat silhouette and stars found at Ross. Bright green reindeer moss adds the finishing touch, along with the requisite container of Halloween candy to satisfy the spooks. 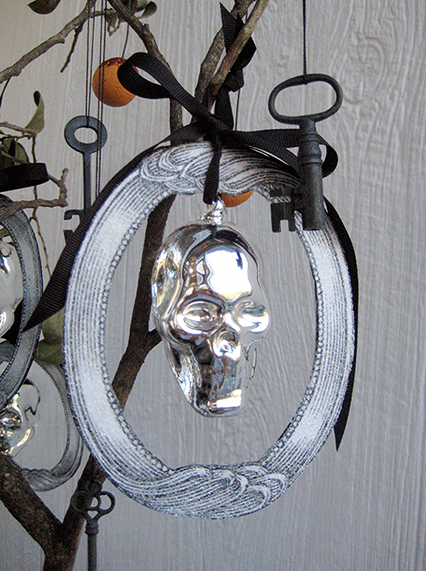 FRAMED HEADS | The image used to frame the mercury glass skeleton heads from Z Gallerie was printed from a piece of stock clip art, flipped in Photoshop on the opposite side to match up, then glued to matte board, trimmed with an Xacto knife and glued and glittered with glow-in-the-dark glitter from Martha Stewart Crafts. I thank Devin for helping me with those. Black grosgrain ribbon was tied around the tops of the frames for hanging. The skeleton keys found on eBay were simply hung from the branch with black cotton thread at varying lengths. FLAMING FUN | These old-fashioned counter-weight wire candleholders by Bethany Lowe Designs added just the right mood. Of course they look great in the photo and can create the right mood in real life, but have to be carefully attended—especially on a dried branch—as with any live flame. The candle holders were purchased from Bayberry Cove. 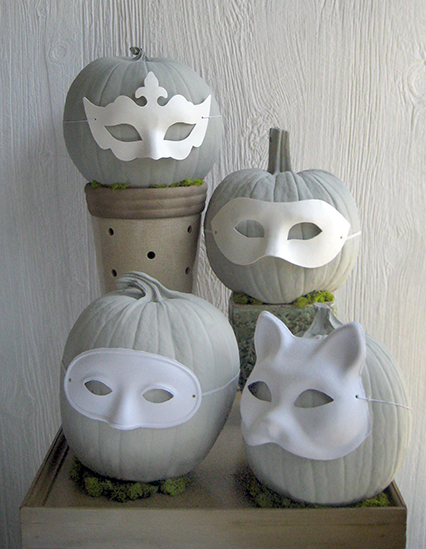 PARADE OF CHARACTERS | Real pumpkins are painted with flat gray latex paint to look as if they are casted. The simple and inexpensive paper masks from Target were slipped onto the painted pumpkins making this family of last-minute apparitions come to life without any carving.