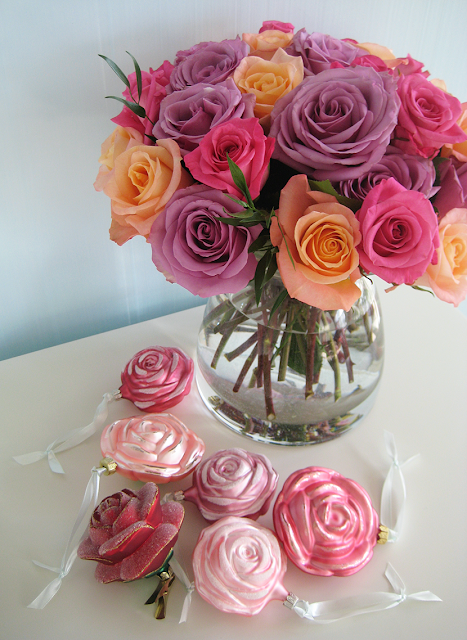 How
Did the rose
Ever open its heart

And give to this world
All its
Beauty?

It felt the encouragement of light
Against its
Being,

Otherwise,
We all remain

—Hafiz
THIS  BLOG has essentially always been my version of "stopping to smell the roses"—if not literally, then certainly metaphorically. In this, it was always my intent to figure out a way combine my life with my work while finding a place to express cherished memories and new thoughts about what's going on around me. That in itself may bore some people, so I try to create compelling images to pull people closer, and stop them for a moment to contemplate the simple beauty of life. If that makes them stay a little while and explore the senses in celebrating the natural world, then I've achieved my mission.

THOSE  THAT  take the time to read a bit further, to stay a little longer, I hope, are rewarded with something they can relate back to their own lives—essentially by "stopping to smell the roses." As the line under the banner says: "There’s no better celebration of any season than the decorated tree adorned with the rich symbolism of nature. This is my ritual to inform and inspire you in the journey called life." 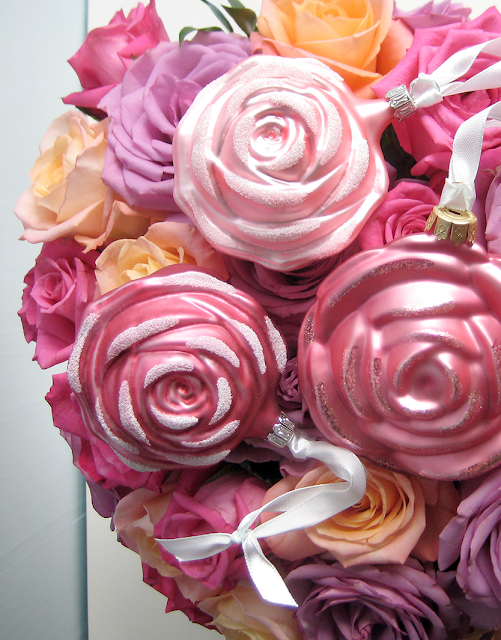 JUNE  IS  the month of roses. In bloom everywhere, the rose is the birth flower for the month. Whether given or received, roses symbolize joy, love and affection. And depending on the color, they can evoke a particular sentiment and a variety of meanings.
PROBABLY  the most beloved, and certainly one of most beautiful of flowers, the rose has a resonant and meaningful life, dating back to before human history, with fossil evidence 35 million years old. I think a flower that has lived through the ages would contain a certain wisdom, even if it's only related by a simple unfolding beauty and sweet scent. There's certainly a complexity in what it has represented through the ages.

THE  ROSE  is the symbol of love, first and foremost.

AND  TODAY  is the start of a long hot summer.

ROSE ORNAMENTS | (Both photos) My collection of glass rose ornaments is becoming a touchstone for all in my life that I've loved and lost. Of course it's better than to have never loved at all. All you need to do is take the time to stop and breathe in a memory. 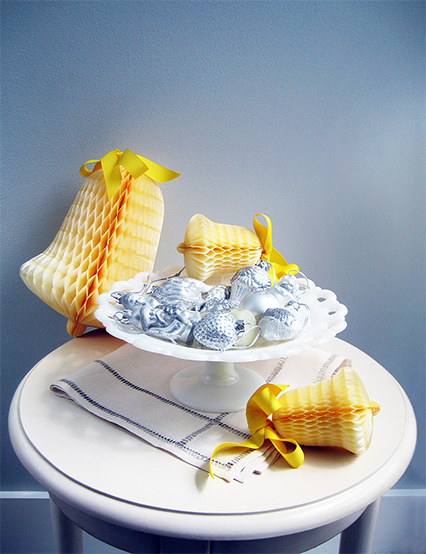 WHO  KNEW?  Queen Victoria wore a white wedding dress. That in itself may not seem like news at all, but since she's widely credited with starting the tradition, it's a revelation. It followed that Victorian era elites, rapturously reading and writing the etiquette books of the day, took Victoria's lead and embellished it with the "connotation of innocence and sexual purity."

FAST  FORWARD to over a century later and the Billy Idol song "White Wedding" served to heighten the fantasy of a virgin bride. Some say that he wrote the song to express his displeasure with his sister's fiancé impregnating her before marrying her. It was a nice day (meaning the '80s) for a white wedding, because it was one of Idol's most successful songs.

VICTORIA and husband/cousin Albert are also subsequently credited for popularizing the modern Christmas tree. Either alone is a testament to the great effect these kissing cousins had on modern culture. She was the longest-ruling monarch of Great Britain (64 years!), during a time of economic and imperial expansion (Albert died early in 1861). Victoria gave her name to the Victorian Era, but she was also nicknamed the "grandmother of Europe" since the fruitful couple had four sons and five daughters to keep the royal lineage going for decades to come (42 grandchildren).

—From The History of the White Wedding Dress by Kelsey McIntyre

IN  ANY  CASE, weddings are steeped in tradition, rituals and superstition all-at-once. A bridal set of ornaments is an elegant gift that brings the seasons all together in one set, whether used only around Christmas or separately throughout the year, or both. A wedding in June—is surprisingly only the second most popular month for weddings—even with the "June bride" being part of the cultural dialog. June falls just below September in wedding month popularity (according to the Knot). Victoria and Albert's wedding date was February 10, 1840, so the June bride didn't start there (that may go back to Roman times). In true Victoria (not Victorian) form, it seems like the only tradition today is to break with tradition, making your wedding unique—a reflection of your own personal style. Maybe, also, one day it won't be so unique for gay people to legally marry in this country and it will be passed into law, for better or worse. I doubt if it will interfere with the sanctity of marriage. And it certainly is better than marrying your cousin. Being a gay man from Alabama, I can say that with hope and conviction, having been in two long-term, live-together relationships, nine and six years respectively, both with whom I still maintain good friendships. 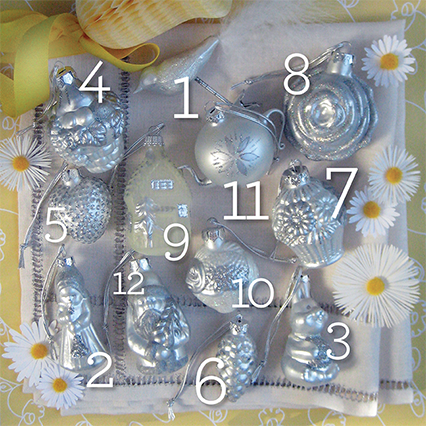 ACCORDING  TO  German tradition, a set of  bride's tree ornaments (all photos this post) are twelve symbols of a happy home—a nice gift to wish the newlywed couple success in marriage and life. Follow the numbers to find the meaning, ritual or superstition behind each: 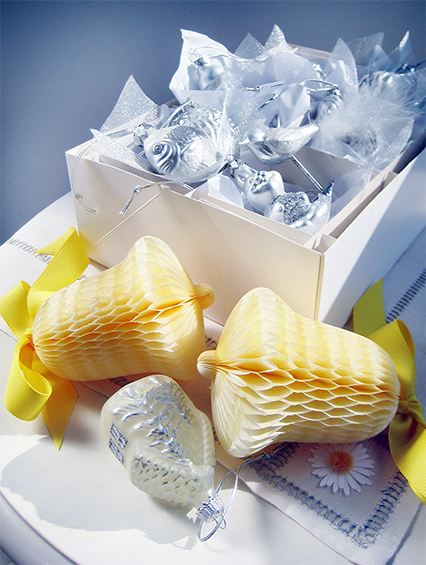 WRAPPING an heirloom such as this set of ornaments warrants a reusable box with protective squares of archival tissue. I've added squares of wide shimmery organza ribbon as an accent. The bride's ornament set can be found in pre-packaged gift-boxed sets, but since this set was found individually, an ornament box was necessary to contain it. This starter set of holiday ornaments can be used together at Christmas or individually, according to the season. Small inexpensive honeycomb wedding bells are a nice topper to the gift instead of a traditional bow (they can also be positioned half-opened, taped to the top of the wrapped box).

WEDDING TABLEAU | (Top) This unusually neutral white and silver bride's tree set was found individually a few seasons ago at Star Provisions in Atlanta. I had to replace the original house ornament which was broken with a similar one from the grand daddy of the German glassblowing tradition, Krebs Lauscha. (Center) I've numbered the set of ornaments to correspond with the list of their meanings. (Bottom) If found individually, it's a nice gesture to archive the ornaments for gift-giving and keeping. The linen napkin with beautiful silver-threaded stitching is by Thomas O'brien, from his Vintage Modern line for Target in 2005. The paper daisies were found at Michaels and the honeycomb wedding bells are from Martha Stewart Crafts.