ATHENA, the Greek goddess of wisdom was represented or accompanied by an owl in mythology. 'Little Owl' (Athene noctua) was her ever-watching "mascot." Large numbers of owls were said to nest in the Acropolis in Athens, which is the temple dedicated to Athena. As her symbol, the owl accompanied Greek armies to war, gaining the mystique of being seen as a protector. 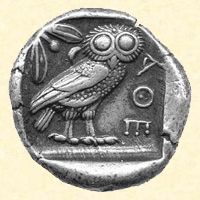 FLIP SIDES | Rather than being emblematic of a deep connection with wisdom and intuitive knowledge, much traditional folklore places the owl as a messenger between the living and the dead—or even as death's messenger-in-chief. A less morbidly superstitious belief has them simply representing a metaphorical shift in perception, providing insight and wisdom to something we haven't seen or considered before—an (un)conventional wisdom, as it were. In ancient Greece, this coin (right) was the most influential of its time. The Athenian Owl featured Athena on one side and an owl on the other (shown). Nicknamed "Owls", these coins were in circulation for well over 300 years (c. 430 B.C. to c. 99 B.C). It is also the first widely minted coin that placed a 'head' on the front and a 'tail' (an animal image) on the back. 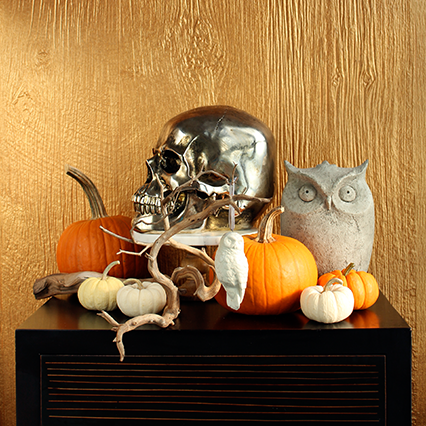 SOME CULTURES associate owls with sorcery and evil (Aztecs and Maya), while others consider owls as bad omens (Arab mythology), but the association with wisdom, art and scholarship (which all have their roots in Greek mythology) is the most resonant in Western culture. 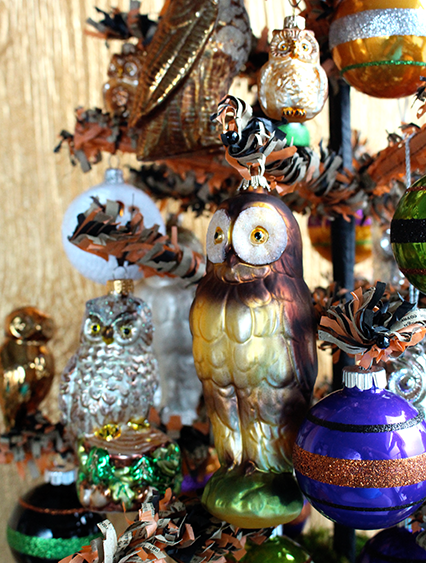 PART OF THE MYSTERY surrounding the interpretation of the owl as an animal symbol lies with the longevity of the species. Dating back as much as 60 million years, the owl has been found in prehistoric cave paintings as well as ancient fossils. This span of time over millennia, no doubt, contributes to the owl's mysterious nature and is further amplified by its nocturnal habits and eerie call, giving its nighttime appearances an otherworldly demeanor.

SYMBOLIC MESSENGERS | This fantastic Owl Totem tree topper inspired this tree and was found last season at Star Provisions in Atlanta, but you might find one online at Terrain (or not). They seem to be very popular and hard to find.

OWLS HAVE BEEN represented in the market—more and more the past few years as decorative items and ornaments. You can find them everywhere if you haven't noticed. This paper tree displays the collection of owl ornaments I've gathered, lending a mysterious quality perfect for Halloween. The owl totem topping this Halloween tree is a paean celebrating the owl's mystery and the good and bad of its generational (as well as cultural) history. In Indian American traditions, the owl is referred to as the Night Eagle. The owl totem has a special connection with the night and the moon which is a perfect symbol for the change in the airspace that mysteriously blows in with the autumn season. 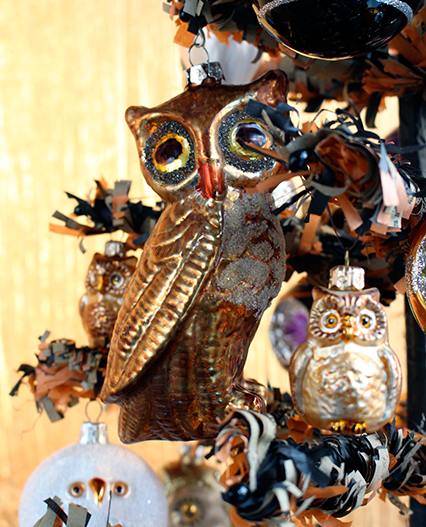 THIS HALLOWEEN (and first days of autumn) signal the return of my blog after a much-needed hiatus. Taking time for the important things in life, I have found an amazing new partner, a new job and a new lease on life (as well as a new camera). Just as the owl represents transformation and change, my intuition tells me that this renewed creative flight is a protective symbol of what's to come. The owl has played a diverse and fascinating cross-cultural role in myth and folklore and its intuitive wisdom surely holds lessons for all of us. It allows us to explore the unknown in such a way that can uncover the magic that we might otherwise miss in keeping a watchful eye and listening for the eerie call of "whooo."

Posted by darryl moland at Tuesday, October 21, 2014 No comments: