I FIRST designed a tree several years back with a Twelve Days of Christmas theme around a set of beautiful figural ornaments I have cherished for many years. But I never photographed any of it properly for the blog. This year, as a special celebration, I'm posting an image every day, starting today and for all twelve days.

IT'S A BAKER'S DOZEN of posts that illustrate how I form my thoughts in designing a tree, both thematically and conceptually, with each day's photo revealing some of the decorative elements involved in composing it.

THE TWELVE DAYS of Christmas is a time-honored carol. Although the specific provenance of the song is not known, the twelve days it touts, between the birth of Christ (Christmas, December 25th) and the coming of the Magi (Epiphany, January 6th), form its structure. With this in mind, I never remove any Christmas decorations until all twelve days are up!

THIS BEAUTIFULLY EVOCATIVE carol possibly began as a Twelfth Night "memory-and-forfeits" game in which the leader recited a verse, and each of the players repeated the verse. As each verse was added, the game continued until one of the players made a mistake. The player who erred had to pay a penalty, such as a offering up a kiss or a sweet. This is how the song was published in its earliest known printed version, in the 1780 children's book Mirth Without Mischief. The song is apparently much older, but it is not currently known how much older. It is generally thought to have been written in the Middle Ages. No matter, the song is beloved, even today.

THE BOOK in the photo above was published in the mid-eighties as a first American Edition. It is one of my all-time-favorites. Its illustrations are brilliantly rendered by Louise Brierley. Their subtle colors and stylized figures provide a rich visual reference that has always seemed as evocative to me as the song's much-interpreted lyrics. This book is the basis of my inspiration for the tree to come. 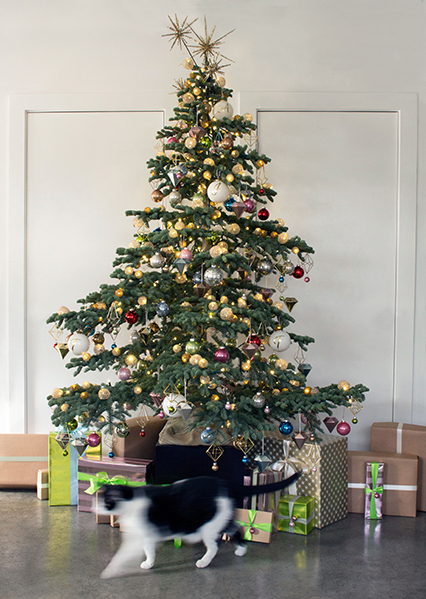 A TREE HAS taken root. A family has formed. And this is already our second Christmas together. Life has been busy. And our view is constantly in motion. But, despite the turmoils of the world, we have the comfort of each other. A Christmas tree is a bright reminder of that.


THIS TREE, in a small way, is symbolic of our new family, hung with initialed ornaments representing each of us. The wire and cardboard diamond-shaped ornaments represent a strong structure for a great future together. The tree is a Silver Tip tree, which is naturally sparse with ample space between the branches and a quirky natural shape reminiscent of the untrimmed trees you see in vintage photos. Many of the lights on the tree have crinkled metal light covers in gold and silver in various sizes to give the tree a magical glow.

LOOKING CLOSER, this tree is topped with a multi-faceted and glittered shooting star. The tree employs a fairly neutral color scheme of glass ornaments in gold, silver, bronze, whites and greens with classic bright blue and red punctuating the mix as a nod to the traditional trees of my childhood.


THE FRAMEWORK for a family starts with a bedrock of comfort, joy and love. When things are right, whatever life throws your way is tempered by knowing that you have someone there that has your back. When you feel that, you know it's the real thing.


WARM HEARTS are warmed even further by a beautiful tree that is thoughtfully decorated. I chose to make this one thematic in color and form, but even if your tree is a hodgepodge of family heirloom ornaments of every style and stripe, what really matters is that it conveys that magical spirit of the holidays. The symbolic memories attached to decorations give them a heirloom resonance throughout the years that is unique and meaningful to your family.

Please check out the video of the tree below (hopefully, I'll figure out how to make the resolution better and replace this one):