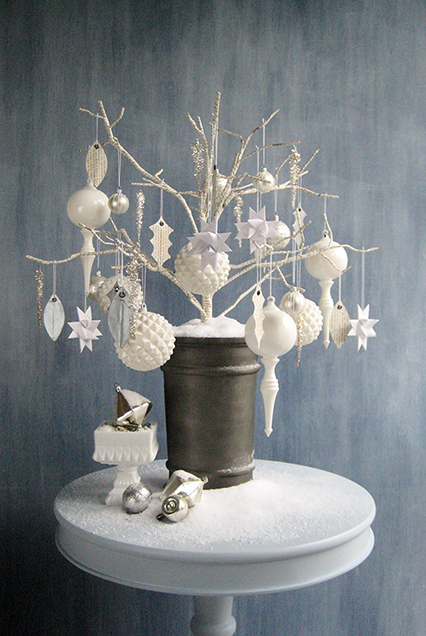 RARELY DOES it snow in the American South. Today it has flurried most of the day. Not much usually accumulates in Atlanta, but it still brings a magical quality to the air. It makes it feel a lot like Christmas—the fairy tale type of Christmas anyway. I remember it snowing a good bit more during my childhood, but not so much anymore. I think we get about the right amount of the white stuff in the winter months here. I know I wouldn't want to deal with the snow as my Northern neighbors do almost every day in the winter.

IT'S STILL an event when it snows here in the South—especially in December. Maybe this year I can dream of a white Christmas. Just an hour or two after I finished this tree and photographed it yesterday, it started snowing. What a magical thing to happen! It almost seemed like I conjured it up without knowing it. I decided to eat lunch at a local diner with wrap-around windows just so I could watch the snow floating from the sky for the first time this season, while thinking of what I might write for this post. This tree and the leaf ornaments on it are wrapped in words—just what I try to do in this blog—wrap each tree I photograph in words.

IT WASN'T but a few years ago that I remember waking up on Thanksgiving day and looking out and seeing the ground blanketed with a fresh snow. But I was visiting my friend Andrew in Toronto, Canada. He, being a Canadian was used to the snow and wasn't surprised (it was their first snow of the season that year though). I remember my excitement. Who ever heard of a white Thanksgiving? (It was Thanksgiving in America, not Canada). And just learning this year from Andrew that he has advanced cancer, I'm sure he's counting his blessings. I know that a white Thanksgiving in Canada was quite a magical time for me. It was the first time I had been out of the country since the summer after high school. And I hope Andrew has more white Christmases than the doctors predict. You never know what magic can happen. 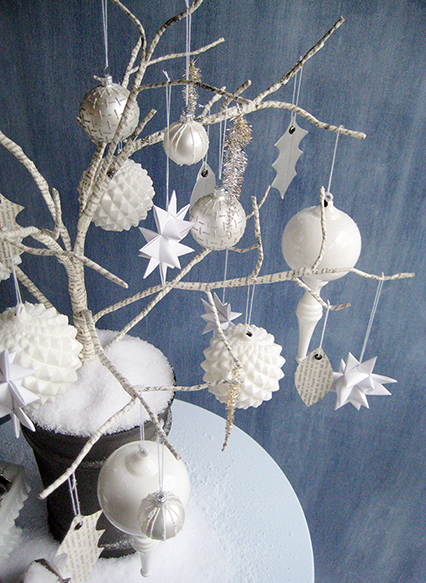 IRVING BERLIN wrote the song "White Christmas"  (poolside, in the summer, it is speculated) and it remains the best-selling singles of all time. Famously recorded by Bing Crosby, it first appeared in 1942 as part of an album for the film Holiday Inn. I've seen this movie several times with my friend Craig. It was a yearly event for us to get together and watch it around the holidays—maybe it's time again. The song probably became an instant hit because of its mix of melancholy— "just like the ones I used to know"—with images of home "where the treetops glisten," due to American soldiers being stationed overseas. The Armed Forces Network during World War II was flooded with requests for "White Christmas." I'm sure my father, who was in Europe during the war, heard the song and longed to be back in Alabama, whether the treetops were glistening with snow or not.

SO HERE'S DREAMING of a white Christmas this year in Georgia or wherever you might be. After all, a holiday tree like this might really conjure up some snow, or maybe just only a memory of a particularly magical moment of your life. Whatever it might be, the cool whites of snow, are a fresh way to go. 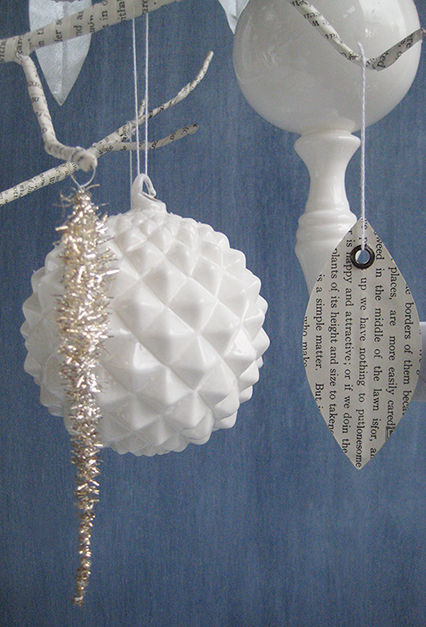 STUDY IN WHITE | (Top, middle and above) A snowy tree all dressed in white and silver to capture the magical quality that snow can create. The Twig Topiary tree is from this season's David Stark Collection at West Elm, which I've placed in a heavy antiqued aluminum vase. Faux snow from Pier One Imports simulates an icy-cold look. Hanging the ornaments with white cotton thread gives a consistency to the wintry look. 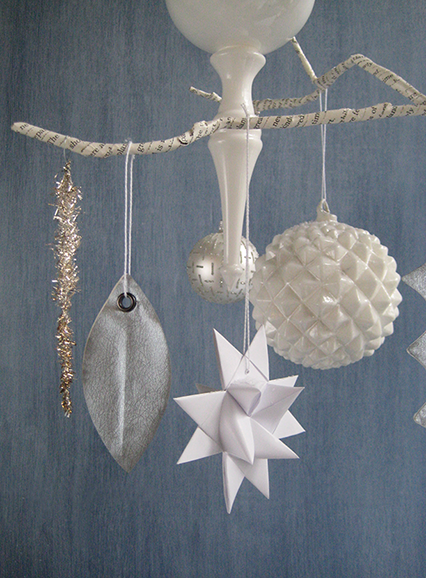 SNOWY ASSEMBLAGE | (Above) From left, a German lametta icicle ornament from my collection, a silver paper (backed with print) leaf ornament from the David Stark Collection for West Elm, a Snövita Scandinavian folded star ornament from IKEA, and milk glass pinecone sphere and finial ornaments from Z Gallerie. 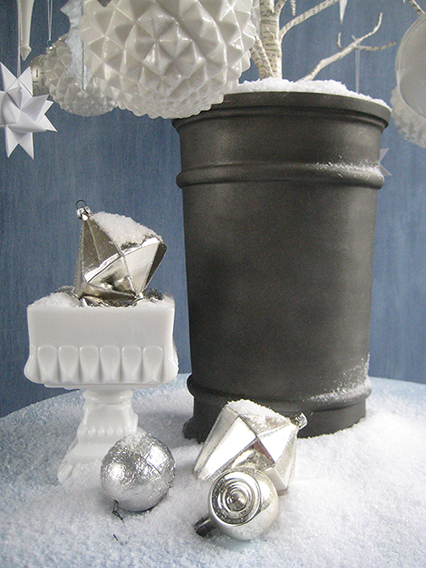 STATELY CONTAINERS | (Above) The tree is placed in a gunmetal gray aluminum vase bought several seasons ago at Restoration Hardware. I dabbed strategic areas of the vase with a wet sponge to make the "snow" stick for a natural windblown look. All other ornaments, the silver foil candy container ornament and white milk glass container are from my private collection.