the year of the rabbit 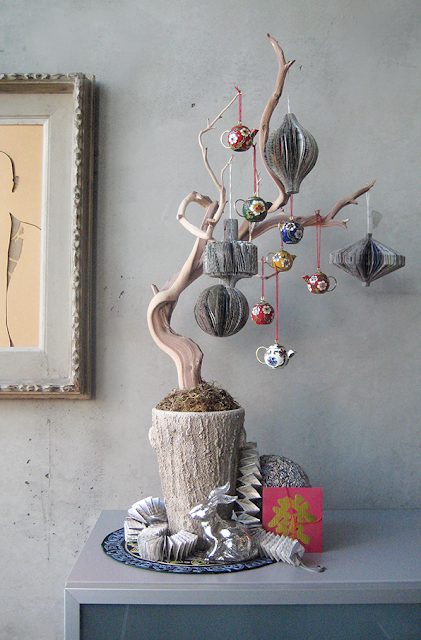 AFTER  A  FEROCIOUS  Year of the Tiger in 2010, a welcome calm is marked in 2011 by the Year of the Rabbit. The Chinese calendar is based on a combination of lunar and solar movements. New Year's Eve (February 2nd this year) and the first three days of the new year are the officially observed holiday in China. The majority of businesses (with the exception of movie theaters and restaurants) close for the celebration. The Chinese people return to work between the 5th and 8th day. New Year's Day is February 3rd this year, but the spirit of the celebration lasts through the 15th day Festival of Lanterns on February 17th.

THIS  TREE  symbolically holds a diminutive ceremonial tea for Chinese New Year. Last year a client of mine gifted me a collection of miniature cloisonne teapots from China. This year these beautiful ornaments complete a symbolic set of 11 ornaments (representing the year 2011), along with four recycled newsprint ornaments shaped like lanterns. Just thinking of a ceremonial cup of tea by the light of lanterns evokes the calm and placid mood symbolized by the rabbit. The idiom "tempest in a teapot" doesn't apply here. 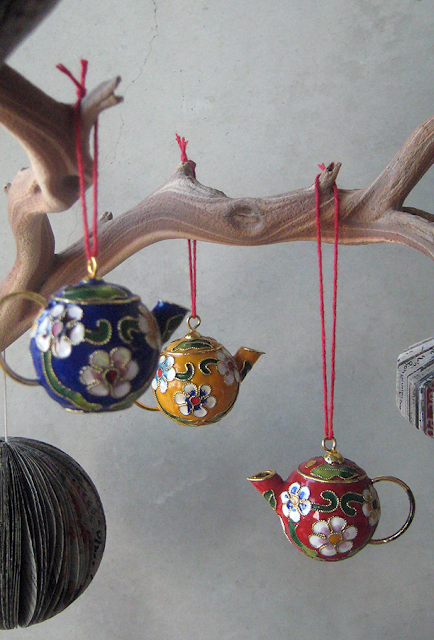 CLOISONNE  ENAMEL  is also called the "Blue of Jingtai" in China. Blue is the dominant color used for enameling and cloisonne became popular during the reign of Jingtai (1450-1456) in the Ming dynasty in China. The cloisonne teapots are made by the process of applying enamel to the surface of a copper or bronze object, which is then fired to become a colorful work of art. The technique was spread to China from the West and perfected by Chinese artisans. 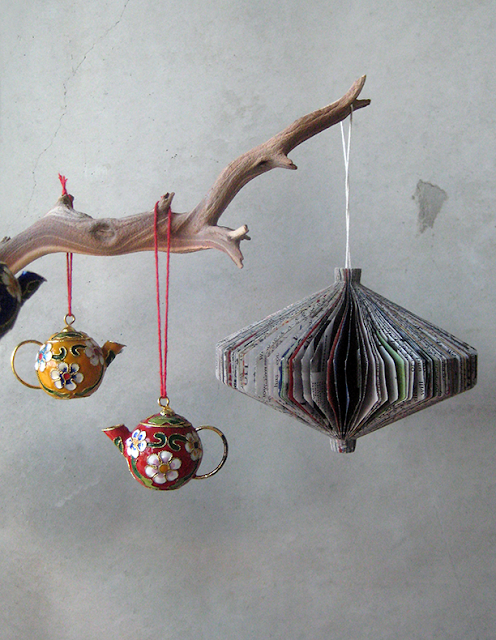 LIGHTED  LANTERNS  appear everywhere during the Chinese New Year celebration. Fireworks are also "lit" as  a big part of the festivities. The noise of fireworks is believed to wake up the dragon who will fly across the sky to bring spring rains. Some believe that the noise of the fireworks is supposed to scare away all evil spirits, preventing them from entering the new year. In fact, gunpowder was invented in China over 1,000 years ago for that very purpose. Firecrackers are thrown at the feet of the dragons in the celebratory parade to keep them awake, since they are believed to sleep the rest of the year.

CHINESE  NEW  YEAR  is traditionally celebrated by a religious ceremony honoring heaven and earth, the gods of the household and thanksgiving. A sacrifice to ancestors is the most vital of all the Chinese New Year rituals. Family ancestors are honored by food and incense offerings to the gods. At midnight, the celebration really begins, as it does for any New Year celebration. Fireworks fill the sky and the streets are packed with people wishing each other a happy new year. The next morning, gifts are exchanged among family members and friends, including "lucky money" given to the children in a red envelope like the one seen in the photographs here. 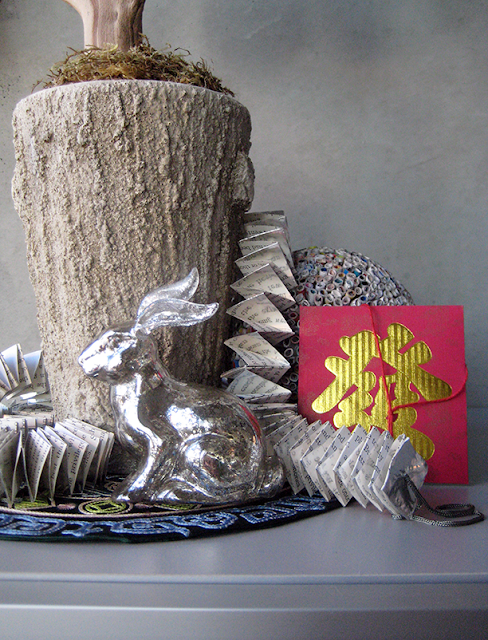 THE  DEMEANOR of the rabbit is the symbol for a quiet and placid year to come. Few people are aware that the rabbit is the symbol of the moon, while the peacock is the symbol of the sun. Together, these two animal signs represent Yin and Yang. Pay particular attention to the full moon this year and you just might strengthen your inner "Chi" energy and bring wisdom into your life. Here's wishing everyone a happy calm and healthy prosperity in The Year of the Rabbit. 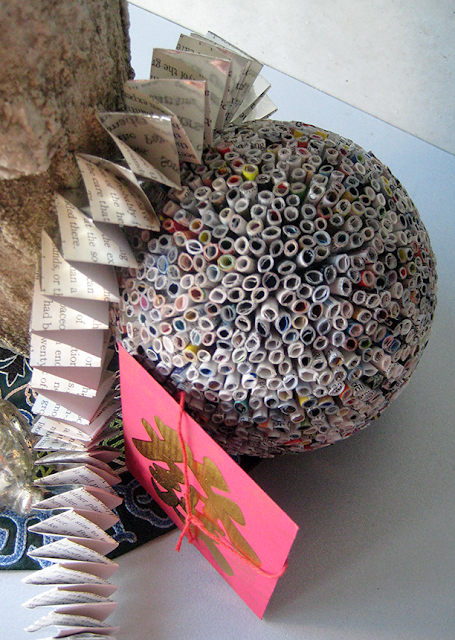 LANTERN FESTIVAL | (Third photo) Repurposed newsprint cut into fantastic lantern shapes complete the tree and sets the mood for tea. The lanterns are distributed by Roost Home Furnishings. Mine were purchased this past holiday season at Star Provisions in Atlanta.

GROUNDED RABBIT | (Fourth photo) A mercury glass rabbit ornament is  from this past season's offerings at West Elm. An asymmetrical manzanita branch "tree" bought at Homegoods is held upright in a faux bois cast stone container. You can learn more about the art of faux bois and Mexican artisan Dionicio Rodriguez from the book Capturing Nature, written by Patsy Pittman Light. Read about the Faux Bois sculptures of Dionicio Rodriguez here at Martha Stewart Home and Garden.

WAKING DRAGON | (Bottom photo) an accordion garland made from printed paper backed by silver (from this past holiday season's David Stark Collection at West Elm) represents the undulating dragon. The ornament ball distributed by Roost Home Furnishings is meticulously made from dozens of rolled recycled paper cylinders that evoke the omnipresent fireworks marking the New Year in China (while keeping the dragon awake). The red envelope for "lucky money" completes the picture.