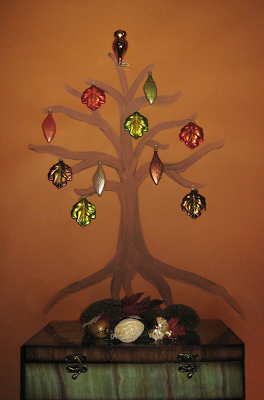 Laden Autumn here I stand
Worn of heart,
and weak of hand:
Nought but rest seems
good to me,
Speak the word that
sets me free.
—William Morris

F A L L   T R E E S  become a saturated blaze of earthy color after a spring and summer of growth. The first artwork I created that got any attention started with a crudely painted bare tree trunk and limbs, then daubed with red, green, brown and yellow leaves applied with bits of sponge dipped in tempera paint, which I'm recreating in the photo at right (except with glass leaf ornaments). I did this sponge painting in kindergarten and proudly brought it home to give to my mother. She considered it a "masterpiece" (as only a mother can do). She kept the tree painting folded neatly in her drawer for as long as I can remember and would pull it out occasionally to show to friends and relatives.

P A I N T I N G  was one of the first indications that I had an eye for arts and crafts. My mother keeping and cherishing that painting as she did let me know it was nothing ordinary. Her tucking it away for safekeeping like it was something precious probably had more to do with my becoming a visual artist than any raw talent I ever had. It gave me the confidence inherent in creating something and taught me to love expressing myself with the raw materials of color, texture and form. My eyes turned into visual sponges—like those bits of paint-soaked sponge that I used to create that fall tree. My interest in absorbing the visual beauty of my surroundings started right then and there. 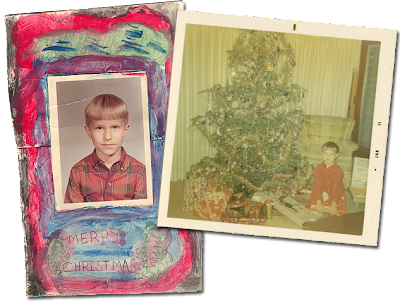 M Y   K I N D E R G A R T E N  teacher was also our next-door-neighbor where I grew up, so school was an easier transition for me than a lot of kids. I always excelled in school because I loved the adventure of learning new things. I was one of the geeky popular kids—the good-grade set with social skills. My parents were both actively involved in my sibling's lives—as stretched out as they were (I came along ten years after my brother Mal). One or both of my parents was always nearby in all our extracurricular endeavors (the band for my sister and I, and the football team for my two brothers), so I was what they called one of the "good kids," probably only because I knew mother and daddy would promptly find out if I ever did anything wrong.

M O T H E R   A L W A Y S  let me take charge of decorating the Christmas tree each year, once I was old enough to do so, and it became a lifelong passion that has grown to obsessive proportions. That's why I'm doing this blog. I have a lot to share and have amassed an enormous array of decorations and ephemera with which to do it. I'm less than two years away from being fifty, so it seems like a natural progression during the autumn years of my life. It is also a means by which to collect my thoughts and ideas for a book called "The Decorated Tree" that I want to publish someday. And it's all about freeing this dream I've had for years and making it a reality. 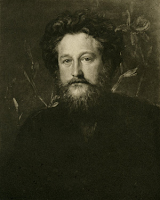 W I L L I A M   M O R R I S, who wrote the short poem that begins this blog post was a leader in the Arts and Crafts movement begun in the late 19th century. The more I read about him (shown, left, at age 37), the more it seems my ideas about resolving craft with industrialization are in alignment. Today, that means retooling a new appreciation of things still well-made by industry by sorting through the mounds of schlock that is mass-marketed. Modern society, as Morris feared, has become all about being fast and cheap and has lost a lot of historical context in translation. He rejected the opulence of the Victorian era and urged a return to medieval traditions of design, craftsmanship and community. Aside from being a poet, an artist and a social reformer, he is probably most well-known for perfecting the use of woodblocks for printing the nature-inspired wallpaper and textiles he designed, many of which are still in use today in one form or another. His political writings were geared toward a push away from the dehumanizing effects of the Industrial Revolution and a longing for a society in which people could enjoy craftsmanship and simplicity of expression.

M Y   S I G H T S  are set less broadly than his (or maybe not), but in any account, that is exactly what I want to do with the holiday tree, which has all but become a meaningless decorative concoction without much reverence to the natural world and the history that created it. It hasn't always been that way. I believe that life ultimately finds its true meaning in nature and we must revere our history. And like a vibrant falling leaf, I hope to find good ground to nourish and tap into a time-honored wellspring of renewed ideas.

MEMORY TREE | Almost 40 years later, I recreate that kindergarten tree painting (above, right), except, instead of daubs of paint sponged on for leaves, there are glass ornaments. The broad leaves are made by Department 56, the narrow ones are from Cost Plus World Market (past season). The tree is topped by an owl ornament from West Elm (past season). Surrounded by moss and real autumn leaves, the nut ornaments (atop the faux-finished memory box) symbolize rebirth: a glittered-glass walnut by Martha Stewart Everyday at Kmart, a walnut and a chestnut by Inge Glas (past seasons).

KEEPSAKE MEMORIES| Here I am at about age 10 next to the Christmas tree at home (in 1971), accompanied by a handmade Christmas card painted for my parents with my school picture pasted on it (above, center) made around the same time.

ARTIST AND CRAFTSMAN | William Morris (bottom, left), born in 1837, was directly inspired by the flora and fauna of the natural world and warned of the dehumanizing effect of the Industrial Revolution. He is known as the Father of the Arts and Crafts movement which got its start in the latter 1800's. Painting by George Frederic Watts, circa 1870.