"If there were a little more silence, if we all kept quiet . . .
maybe we could understand something." —Federico Fellini 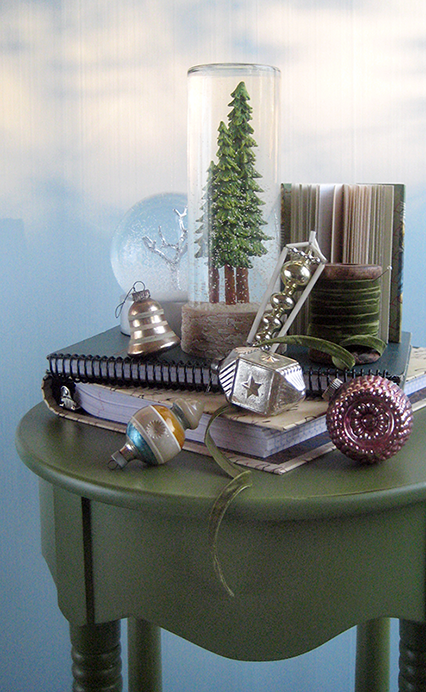 QUIETLY  IMAGINING  the feat of nature it takes to unite billions of singularly unique and delicate ice crystals to form a fresh blanket of snow is mind-boggling if you think about it. Memories are much the same. Thoughts guide you through the atmosphere, form together, and freeze into beautiful structures with which to blanket one's life. The transitory nature of memory is the attachment to our psyche, to something larger, to something enduring and resonant at our core—our very soul (God if you like). Snowflakes embody our attachment to nature. They literally and magically form from thin air—miraculously and mysteriously remembering how to align ice crystals into rare and beautiful structures.

SNOWFLAKES  are only one of nature's many wonders. Some are completely symmetrical, some are columns of ice crystals, and some are their own unique shape, but their structures are astounding! It's no wonder a fresh snowfall has a magical quality. Wilson Bentley, who during a snowstorm on January 15, 1885, obtained the first photomicrographs ever taken of an ice crystal. He is credited with the oft-repeated phrase "no two snowflakes are alike." But still, they distinctly reveal nature's symmetry. A hundred years later, American physicist Kenneth Libbrecht would study and photograph snowflakes anew with much more sophisticated technology and give us hundreds of images such as the one you see here. It is as humbling as looking into the stars to see these snowflake images. They are published in a number of popular books. 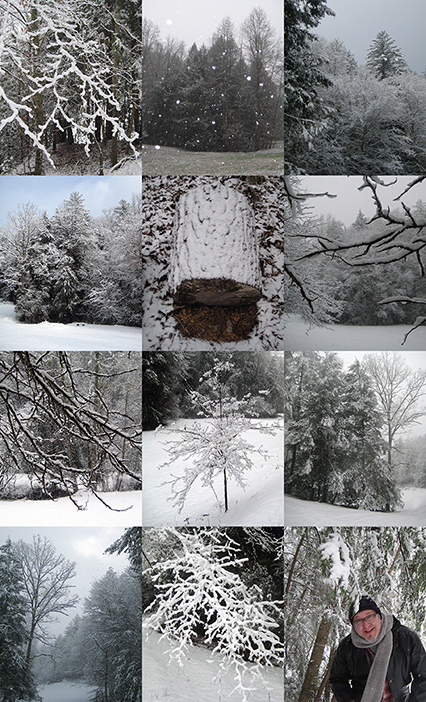 FOR  THIS  to be created to make the proverbial White Christmas this past year was purely magical. Overnight, the world outside would be changed into a winter wonderland. The snow kept falling through Christmas day and night. I was fortunate enough to be with friends in a cabin in the mountains of north Georgia for the holiday surrounded by acres of pristine land. Mother Nature decorated the trees this time, not me. Being in the American South, a Christmas Day snowfall is literally a once-in-a-lifetime occurrence. There hasn't been a Christmas Day snowfall like this since 1882. As I write this, Atlanta has been put to test with another snow that has shut down businesses for two days, going on three. We're just not prepared for such weather. I, for one, have relished the peace and quiet of another magical "holiday" and spent most of the time indoors this time since the roads are icy and my workplace is closed. Staying put and embracing the silence has been welcome after a busy holiday season. 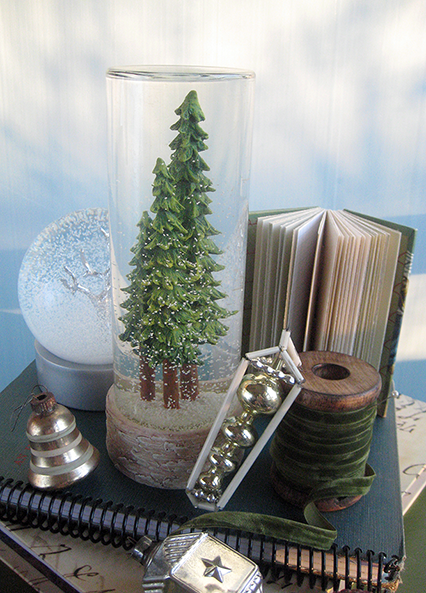 MEMORIES  ARE CAPTURED  when the world looks pristine and new again and a freshly-fallen snow helps transcend one to a place that seems otherworldly. Its transitory nature serves to remind us to take stock of its pristine beauty, knowing it will become a memory soon. A snow globe captures that bit of magic in miniature.SNOW  GLOBES  first appeared in the late 1800s in France. The most famous being a commemorative snow globe at the World's Fair in Paris which contained a miniature Eiffel Tower. Miniature worlds for holiday memories and nostalgic keepsakes were captured within glass along with their own snowy weather system. With just a shake, a mesmerizing, lasting collectible was born. By the 1920s the snow globe had caught on across Europe and in the United States. WHETHER GOING by the name 'snow globe,' 'snow dome,' or 'snow shaker,' they have enchanted people for more than a century. They create a hypnotic miniaturized world that is imbued with nostalgia and remembrance. Shaking the ball and watching it snow in the world within it captures the imagination. 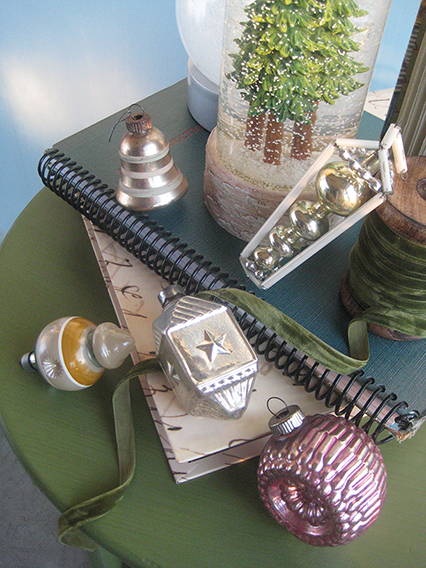 SHOWN HERE  along with my small "collection" of two tree snow globes are antique ornaments to imbue a historical perspective. My favorite "globe" has a grouping of three tall evergreens and isn't a globe at all, but a column of glass in a faux birch bark base. The other is a silver winter tree in a traditionally round globe that has larger amount of snow, creating a blizzard effect that drifts down softly. I diligently photographed them in action, just as I took hundreds of photos of the Christmas snow to try and capture the magic of it all.

IT  WON'T  BE  long before all of it is just a memory again. But memories like these are the ones worth holding onto and sharing.

SNOW MEMORIES | (Top) My two snow globes are shown with old-fashioned notebooks, ribbon and vintage ornaments. The cylindrical "globe" is from Target a few years ago and the round globe was added to my collection this past holiday season from West Elm.

ICY PHOTO | (Above) This snowflake is one of many amazing images captured by physicist Kenneth Libbrecht who is interestingly enough originally trained as a solar astronomer. He has published several books illustrating the variety of snowflake forms, one of which I purchased back in 2005 named "The Little Book of Snowflakes." Photo © Kenneth Libbrecht by permission.

SNOW COLLAGE | (Above) That's me in the lower right corner enjoying a rare Christmas snow in Ellijay, Georgia. It was probably the most beautiful snow I've ever seen. I took quite a few photos, some of the best ones are collected here. Photo of me by Jon Chavez.

VINTAGE DECORATIONS | (Above) Trying to evoke memory and history, I chose to photograph my snow globes atop a loose leaf notebook by John Derian Company, Inc. for Target filled with paper and an old book that has been repurposed into a newly spiral bound journal by Ex Libris Anonymous. These ornaments are of unknown provenance, but I'm almost sure the one made from bugle beads is Czechoslovakian. I buy vintage ornaments for their visual appeal, not just for their history. 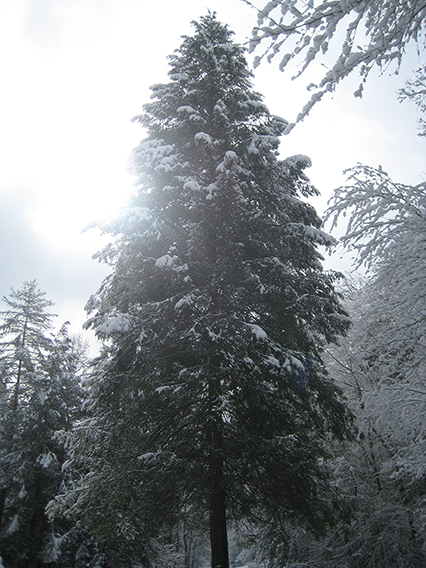 SNOW-CAPPED HEMLOCK | (Above) This giant hemlock tree is deftly decorated by nature. The first clear day after the snow, the sun is peeking around the hemlock and turning the sky a beautiful pale gray/blue. 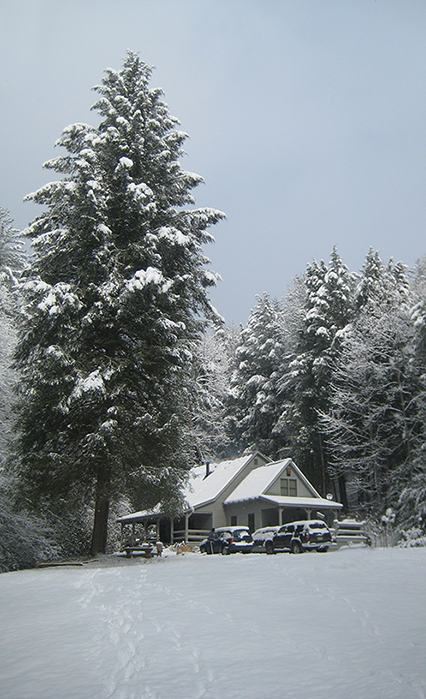 CABIN FEVER | (Above) A friend's cabin is dwarfed by the surrounding trees. It was quite a nice place to spend Christmas this past year with Mother Nature turning the already pristine surroundings into a winter wonderland.